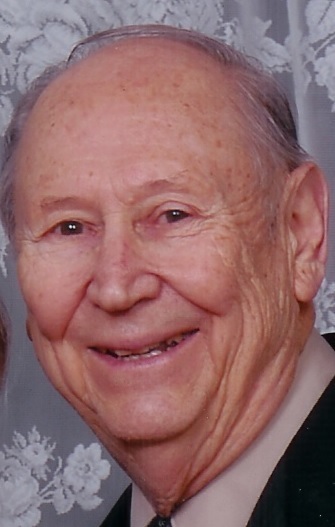 Keith B. Scott left his earthly residence on February 5, 2020 at the esteemed age of 94 years to reunite with his wife Doris and other loved ones. Keith was born on April 29, 1925 in Springfield, Missouri to Clara Susan (Anderson) and John Bradford Scott. He was the youngest of three boys.
His family had moved to Springfield from a farm in Wright County, Missouri two years before Keith was born, seeking the opportunities a “big” city could offer. Keith was the benefactor of those opportunities in the form of medical care and education. At the age of five, his life was saved from a severe lung infection that had taken the life of his oldest brother years before on the farm where healthcare was not readily available. He took advantage of educational opportunities in Springfield as well. His high school graduation in 1943 was cause for celebration as it was not something his parents took for granted.
His education was interrupted when the draft called him up during World War II. He served in the U.S. Army from 1943-1945. Upon his return he graduated from Southwest Missouri State College in 1948 with a Bachelor’s of Science in Sociology and a minor in French.
Skilled in the use of the Stenotype he transcribed pathology notes at O’Reilly Hospital after graduation from SMS and tentatively pursued becoming a Medical Doctor while attending classes at the University of Arkansas before later transferring to the University of Missouri where he earned a Master’s degree in Accounting in 1952.
Keith went on to become a professor of Accounting, first at Central Missouri State University and then at Southwest Missouri State University, for a total of 31 years in the state system. During his teaching career, he earned his Ph.D. and completed the CPA exam.
His first position after obtaining his Masters was in the Methods & Standards Department at Remington Arms where he met Doris Madeline Gregg who was to become his wife on February 16, 1953. Keith and Doris celebrated their 66th wedding anniversary in 2019 prior to her Heavenly migration last June 28. In recent weeks family members felt a distinct sense that she was calling him to join her. He was recently heard to remark that Doris had appeared to him in a dream, that she was young and beautiful and that she told him that he could come any time.
Being a father and a grandfather was Keith’s highest calling in life and he and Doris excelled in their respective roles as they were much needed in them. Keith was a life-long learner and thrived on “discovering” new things. He taught himself how to use personal computers before they became household staples, yet he never neglected throwing a football with his children or donning a Halloween mask to go trick or treating if the need arose. He became a father in his late thirties and always commented that he wished he could have started being a parent sooner.
Keith was a natural at being a grandfather and had endless patience with those that knew him as PaPa. In his eyes they could do no wrong and were a great source of joy to him. He was just as excited as they were to set up a train track around the Christmas tree, go out to a pumpkin patch or be “robbed” on the train at Silver Dollar City.
Keith was above all a man stirred by Faith and after quadruple by-pass surgery accompanied by a stroke nearly 16 years ago he never lost a moment telling others about what God had done for him not only in his recovery from that challenge, but for all of his life. He was a member of the Chapel for Peace congregation of the Community of Christ church.
Keith was preceded in death by his brothers, mother and father. He is survived by his children Jared Scott (Pam) and Mary Scott Pratt (Randall), and his grandchildren Elisabeth Pratt and Samuel Pratt. He is also survived by someone known as “Our Helper”, Carolyn Applegate whose good sense and compassion provided Dad with the best life that anyone with the needs of his final years could ever have. As Carolyn has heard many times over it was “was all predicted” in our church’s Doctrine and Covenants, although Dad never specified chapter and verse.
The family gratefully thanks his friends and caregivers who supported him on his journey back to peace and wholeness with God. We love you Dad and look forward until we are together again.
Visitation will be on Sunday, February 9, 2020 from 2:30 pm to 3:00 pm at Greenlawn Funeral Home North. Service will follow at 3:00 pm. Burial will be on Monday, February 10, 2020 in Warrensburg, MO Memorial Gardens at 1:00 pm.