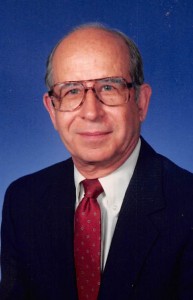 Beloved husband, father, treasured grandfather and great grandfather, Kenneth Dale Rogers went to be with his Lord on February 14, 2016. Kenneth Dale Rogers, 87, was born to Phil and Della Rogers, Orleans, Nebraska, on February 28, 1928.On November 19, 1949, he was united in marriage to Reva D. Rogers and they operated a farm near Long Island, Kansas, until Kenneth entered the U.S. Army in 1952. He served his country in the Korean War and was honorably discharged in 1954. After the service, Kenneth and Reva returned to farming until he enrolled at Kansas State University, graduating with an accounting degree.Upon graduation, Kenneth and his family moved to St. Louis, Missouri, where he practiced public accounting. Several years later, Kenneth commenced working as an accountant for Western Electric (Lucent) in Lee’s Summit, Missouri, for 26 years before retiring as an accounting supervisor. After retiring he began a career in real estate.Kenneth was a member of Blue Ridge Bible Church in Kansas City, Missouri for years, but at the time of his passing was a member of Ridgecrest Baptist Church in Springfield, Missouri. He served on the school board for Blue Ridge Christian School, as well as interim CFO for Calvary Bible College in Belton, Missouri.Kenneth was preceded in death by his parents, Phil and Della Rogers. He is survived by his wife, Reva, of 66 years, his son Ken Rogers and his wife Carol, grandsons, Matthew Rogers and his wife Robin, and Tyler Rogers and his wife Gail, as well as great grandchildren Lorelei and Garrett. Also, survived by his brother Phillip Rogers.Kenneth was a loving husband, father and grandfather. Foremost, he was an example of how to live life as a person of integrity, strong work ethic and Christian values. Visitation will be held February 19th at 10:30 a.m. and Funeral services will be held at 11:30 a.m. at Greenlawn Funeral Home East with burial to follow at Missouri Veterans Cemetery. In lieu of flowers, donations can be made to Missions Global Impact Fund of Ridgecrest Baptist Church, Springfield, Missouri