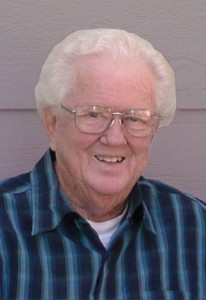 Kenneth E. Wallace, 87, peacefully passed from this world to heaven in his sleep on Monday, September 7, 2015. He was born on August 2, 1928 to James and Blanche (Bandy) Wallace in Galesburg, IL.
Ken’s quality of life had deteriorated over the last couple of months and he was looking forward to meeting his Savior and being reunited with the love of his life, Marge, his wife of 66 years who went home to be with the Lord in October of 2013.
Ken will be remembered by many as a workaholic who, after retiring from Osco Drug Co. after 40 some years, went to work for Shoji Tabuchi for 10 years as well as traveling the country volunteering with the Assemblies of God RV Ministry and locally volunteering with Convoy of Hope and Cox Medical Center until health required him to quit this past spring. (When Ken gets to Heaven he will immediately go to work helping his beloved Cubs win the World Series). But those who really knew him will remember him as an unwavering, unabashed Christian and the best husband, father, grandfather and great-grandfather ever. Ken’s day was never finished until he had spent time in prayer, remembering and praying for all of his kids, grandchildren and great-grandchildren.
Ken is survived by his son Ken and his wife Arlene, his daughter Judy and her husband Rick Hohimer, two grandchildren and nine great-grandchildren.
He was preceded in death by his wife Marge and their son Neil.
Visitation will be from 6:00 until 8:00 p.m. Friday, September 11, 2015 at Greenlawn Funeral Home East. The memorial service will be at 10:30 a.m. Saturday, September 12, 2015 in the Chapel at Maranatha Village with burial to follow at Greenlawn Memorial Gardens.
In lieu of flowers the family asks that contributions be made to the Neil R. Wallace Scholarship Fund at Evangel University.