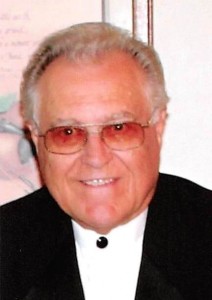 Kenneth M. Hull (Max) as he was known until grown, was born October 29, 1931; son of the late Finis L. and Jessie M. (Wright) Hull. Born and raised on a hill farm near Batesville, Arkansas. He graduated from Batesville High (Home of the Pioneers) in May of 1949 with plans and desire of studying Medicine.
As a child Ken was carried by his mother while she and an older brother walked a mile or more to church. At the age of thirteen, Ken was saved under the preaching of Bro. Kermet Early and subsequently was baptized a member of the 0 ‘N eal Baptist Church.
It was following his High School Years, and while attending a tent revival under the direction of the Reverend Coy Simms, Director of Missions for the independence County Baptist Association that Ken felt the call of God on his life to the Gospel Ministry.
Farming with a team of mules he often commented that he preached to his team of mules all day long until he had the most religious team there was in the country. He had by this time untied with the Pilgrims Rest Baptist Church whose pastor was the Reverend Clay P. Roach. He often praised pastor Roach for putting him in the pulpit as often as possible which gave him excellent training opportunity for the pulpit ministry.
In the fall of 1950 Ken enrolled in the (Southern Baptist College) now (William Baptist College) at Walnut Ridge, Arkansas. He later transferred to Lions College in his home town and finally received his Bachelor and Masters degrees in Theology from International Bible Institute in Orlando, Florida. He later used this training in teaching numerous Seminary Extension courses and writing small commentaries for Sunday School teachers on various Old and New Testament books.
On September 3, 1953 Ken and Jo Ann (Crawford) were wed and to this union three sons were born: Kenneth D. and wife Gina of Grand Junction, Colorado; John R. and wife Joyce who reside near Billings, Missouri and Timothy D. and wife Shelly who live in Republic. In 1970 a daughter, “Julia” joined the Hull family through adoption from Missouri Baptist Children’s Home. Besides their surviving children, the Hulls also have 14 grandchildren and 26 great grandchildren.
In 1964 Ken along with several other Missouri Pastors and Music ministers made a mission trip to the continent of Australia where he did the preaching in three evangelistic crusades.
Ken honors his wife as God’s companion gift to his ministry and his children and grandchildren the pride of a father/ grandfather.
Ken’s pastorate which extends over 62 years has been contained in the States of Arkansas and Missouri.
Other accomplishments were becoming a 3rd Degree Mason and member of the Billings Lodge #379 AF & AM , and a 32nds degree Scottish Rite member of the Joplin Camp.
His hobbies were clock repair, clock building as well as various other kinds of wood craft.
Besides his parents, Ken is also preceded in death by his brother and Baptist Minister, the Reverend J. R. Hull, one infant grandchild, one infant great grandchild, and a nephew Jerry Ray Hull.
Other family members preceding in death were his Father and mother-n-law Roe (Doc) and Clarine Crawford. Besides the immediate family, Ken is also survived by two nephews and a niece, a host of friends from various churches where the Lord has placed him, and two very special friends Kevin Kimsey, with whom he worked for several years in the funeral home and his hunting buddy, Sam Bollinger.
The Hull family would like to pay special tribute to Doctor Robert Ellis and his staff of Cox Hulston Cancer Center and Hospice Compassus for their excellent and compassionate services.
A visitation will be from 6:00 until 8:00 p.m. Wednesday, July 22, 2015 at Greenlawn Funeral Home East in Springfield, MO. A Celebration of Ken’s Life will be 10:30 a.m. Thursday, July 23rd at First Baptist Church, Republic, MO. Burial will follow at Evergreen Cemetery, Republic, MO.