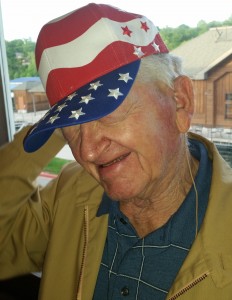 Kennith Allen Ford, 78, went home to be with his Lord and Savior on February 17, 2016, following a brief illness. Ken was born on July 11, 1937 in Alton, Mo to Paris Dephoe Ford and Versia Emmer (Hand) Ford. Ken is the second of five children born to their union. Ken was very close with his father and mother. For that reason he lived nearby to them until they went on to Heaven.
Ken was a country boy through and through. He met his wife, Dorothy Mae (Donovan) Ford, while selling sweet corn out of the back of his car. They went on to share 50 plus years together before she went to be with Jesus in December of 2010. After her passing he missed her daily and spoke of her often. Ken and Dorothy worked side by side as they owned and operated Springfield Optical for nearly 20 years and despite Ken being severely visually impaired, he was an amazing optician and was highly respected in his field.
Ken and Dorothy attended Second Baptist Church and then High Street Church for many years but anyone who knew Ken can tell you that his church attendance was not the most important thing to him. He was concerned about folks’ relationship with the Lord and even had a cap printed that said, “How about your heart? Is it right with God?” Ken knew where he was going when he passed and was happy to say that once he left us he would be with Jesus.
In the early 90’s Ken was able to receive one of the very first cochlear implants in Southwest Mo. His implant allowed him to once again hear and he was proud to tell anyone that would listen about his new gadget.
Ken was funny, stubborn, determined and taught his daughters a strong work ethic. We love you dad and you are already missed!
Ken was preceded in death by his parents, Paris and Versia and his wife Dorothy, as well as his in-laws, Roy and Elizabeth Donovan and sister-in-law, Virginia Riggs. He left behind his 3 daughters: Janice (Ford) Crosby, Malinda Ford, and Deborah Ford and 1 “adopted” daughter, Kim Abbott. Granddaughter Candace Crosby, Grandsons’ Daniel Crosby and Matthew Crosby. Great-grandchildren Natalya and Noah. Siblings: Alford and Barbara Ford, Katherine and RE Weinreich, Phyllis and Allen Meyers, and Bennie and Carla Ford. Brother-in-law: Jim Riggs. As well as numerous nieces, nephews, cousins and close friends.
Services will be held at Greenlawn North Funeral Home on Monday, February 22, 2016. Visitation will be at 2 p.m. with the service at 3 p.m. There will be a grief graveside service to follow.