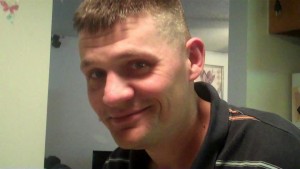 A visitation for Lance Warner Evans, age 31 of Branson, Missouri will be held from 10:00 AM to 1:00 PM, Monday, August 24, 2015 at Greenlawn Funeral Home Branson. Military Honors will be rendered at 12:00 PM.
He passed away on Wednesday, August 19, 2015 at his home.
He was born on August 30, 1983 in Hondo, Texas the son Karen and Jim Stone. He grew up in Oskaloosa, Iowa and graduated from Oskaloosa High School in 2002. He then enlisted in the United States Army where he served for 12 years and four months as a Wheel Mechanic. During his service he completed 4 tours of duty in Iraq during Operation Iraqi Freedom and also earned his Bachelor’s of Psychology Degree and had started working on a degree in Electrical Engineering. After he retired he moved with his wife, Billie and their two daughters, Marley and Lynda to Branson, Missouri.
He is survived by his wife of eight years, Billie Jo Evans of Branson, MO., his two daughters, Marley and Lynda Evans of the home, his mother and father, Karen and Jim Stone of Fairfield, IA., his brother, Christopher Miller and wife Alexandra of Fort Riley, KS., his sister, Jessica Bennett and husband Adam of Fairfield, IA., and one nephew, Eli Miller. He was preceded in death by his maternal grandmother, Shirley Marcaurele and his mother-in-law, Linda Robinson.