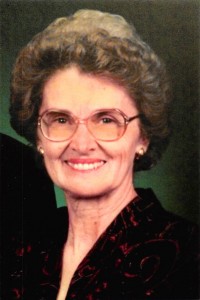 LaReta (Lay) Holland, 81, went home to be with the Lord on Sunday, January 24, 2016 after a long battle with Alzheimers. LaReta passed away in her home surrounded by family in Springfield, Missouri. She was born to Walter and Opal Lay on April 30, 1934 in Eunice, Missouri. LaReta was two years old when her mother passed away and went to live with her aunt and uncle, Earl and Dessie Mayfield until she was an adult. LaReta married Paul Dean Holland on April 30, 1955. To this union two children were born, Deanna Loudis and Alicia Holland.
LaReta was preceded in death by her parents, baby sister, paternal and maternal grandparents, aunt and uncle and step mother. She is survived by her husband, Paul, daughters, Deanna, Alicia and her significant other, Charlie Berry, grandchildren, Amanda Grisham (Neil), Brian Loudis (Jessica) and great-grandson, Henry Paul Grisham.
LaReta was a member of South Haven Baptist Church since 1972. She loved her Sunday school class that she attended for many years. LaReta loved to spend time with family, fish and attend men and Lady Bears basketball games.
Visitation for LaReta will be on Wednesday, January 27, 2016 from 6 to 8 pm in Greenlawn Funeral Home South with services on Thursday, January 28, 2016 at 1:00 pm also at Greenlawn Funeral Home South.
In lieu of flowers donations can be made to Alzheimer’s Association