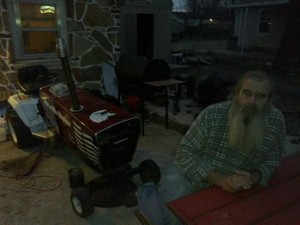 Larry Clifton Lansdown age 67, of Springfield, MO. passed away Monday, August 17, 2015, in his home. He was born February 4, 1948, in Douglas County, MO, to Troy and Lois (Kilburn) Lansdown. He was an avid motorcycle rider, garden tractor puller, and shade tree mechanic.
Larry was preceded in death by his parents and by his son: Troy James Lansdown. He is survived by his sons: Dustin Heath Wacker, Wichita, KS. and Zachary Clifton Lansdown and Michelle, Glasgow, MO. two daughters: Heather Houghton and her husband Brett, Springfield, MO, Wendi Nicole Armbruster, Colby, KS, five grandchildren; Chase, Eldon, Derian, Paige and Morgan, a brother: Dale Allen Lansdown Sr., and his wife: Janice, Bronson, KS, and two sisters; Connie Sue Harris, Chanute, KS. and Janice Elaine Bell, Strafford, MO. as well as many nieces and nephews. A celebration of life will be at a later date. In lieu of flowers, memorial contributions may be made to the funeral home.