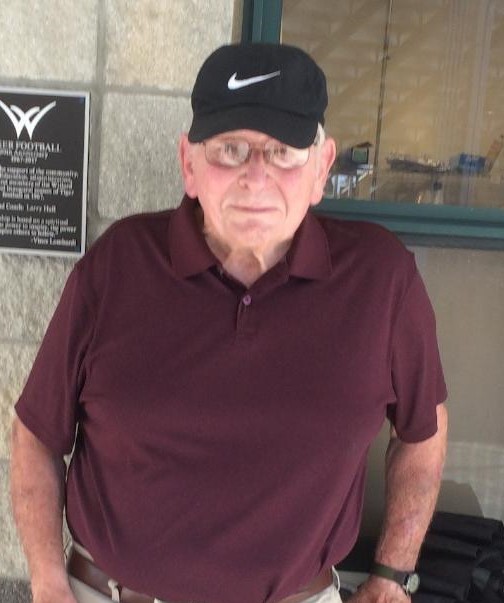 Larry Eugene Hall passed away July 31, 2020 surrounded by his family, who loved him dearly. He was born on August 13, 1937 in Independence, Missouri.

He was preceded in death by his father, Raymond Hall and stepmother Jean Hall, his mother, Mildred Komm and stepfather Paul Komm. His brothers; Jim Komm and John Komm.

Larry attended high school at Raytown High School in Raytown, MO where he was a standout three sport athlete. His prowess on the football field was recognized with a scholarship to the University of Missouri. After two years, he transferred to Missouri Valley College, where he became an All-American athlete in football and track. Ultimately, he was inducted into the Missouri Valley Athletic Hall of Fame in 2006. After his college career, he was drafted by legendary coach, Vince Lombardi, to the Green Bay Packers. After a short stint with the Packers, he returned to Raytown, MO to begin his career in coaching and education at Raytown High School, where he would also meet his future wife, Nancy.

Once married he spent a year in Golden City, MO as an educator and coach. He then moved to Willard, MO where he started the high school football program in 1967. After ten years in Willard, he spent the next 26 years coaching football and teaching social studies in the Springfield Public School system.

In 2008, he began a second career as a pastor at Paris Springs United Methodist Church. He spent the next 12 years there and delivered his final sermon on June 21, 2020.

Throughout his life he was highly involved in the Fellowship of Christian Athletes, the Willard United Methodist Church, and several other service-led endeavors.

He was an avid golfer, never missed watching Jeopardy, and was a life-long fan of the Kansas City Chiefs and Kansas City Royals.

His main focus in life was God and his family. He was an attentive father and grandfather, loyal and loving husband, and an example to all he encountered. He was loved and will be greatly missed.