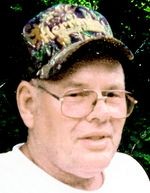 Larry Joe Taylor, 63, Springfield, Mo., was born on June 26, 1945, in Springfield, Mo., and passed away on June 22, 2009. He graduated from Willard High School in 1963 and worked at Herrman Lumber as a truck driver for 45 years. He married Lorene Daniels Taylor on October 6, 2003, in Miami, Oklahoma. He enjoyed hunting, fishing, his kids and grandkids. Larry was preceded in death by his father, George Taylor. He is survived by his wife, Lorene Daniels Taylor; mother, Dorothy Anderson Taylor; children, Carolyn and husband Jim Lovelace, Lorinda and husband Glenn Stavely, Greg and wife Peggy Taylor, Shelly Taylor McVay; grandchildren, Louie and Kara Lovelace, Shon, Brook, Joshua, Travis, Cody and Emily Stavely; great-grandchild, Sammy Stavely; brothers, Darrell and wife Phylis Taylor, George and wife Judy Taylor, Garry and Felicia Taylor, David and Joy Taylor; many nieces and nephews who adored him; several cousins; and close friends, Steve and Linda Highfill, Mike and Bonita Yager, and everyone who met him. Funeral services will be held on June 25, 2009 at 1 p.m. in Greenlawn Funeral Home North with burial following. Visitation will be held on June 24, 2009 from 6 to 8 p.m. in Greenlawn Funeral Home North. The family suggests memorial donation be made to the family.