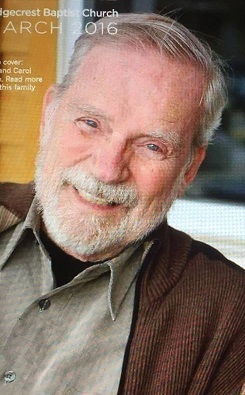 Larry Bangle, age 80, of Springfield, MO, went to be with the Lord on Monday, November 19th, 2018.
Larry was born June 16, 1938 in Chillicothe, OH to Donn and Ruth Bangle. Larry was a graduate of Chillicothe High School. He was a United States Air Force Veteran. Larry was united in marriage to Carol Darby on March 26, 1959 in Kansas City, MO. Larry was an artist, who began his career at Hallmark Cards in Kansas City and ended his career as the head of the creative department at the Assemblies of God Headquarters in Springfield. Larry was a member of Ridgecrest Baptist Church.
Larry was a unique person who enjoyed many creative outlets. He was an avid train enthusiast, model builder, wood carver, magician, pilot, parade organizer and float builder, white squirrel whisperer, and Fox News fanatic. He was a Conservative through and through. He was active in the Marionville community as a volunteer fire fighter, first responder, ambulance driver, City Councilmen, Mayor Pro tem, and a regular attendee of Hillbilly therapy sessions. Above all, he was a man who loved his family.
Survivors include his loving wife Carol Bangle; two daughters, Amy Clark and husband Mark, Brookline, and Beth Hughs and husband C. R., Nixa; seven grandchildren; Ashley Porter and husband Tyler, Alison Matthews and husband Nick, Morgan Jones and husband Trevor, Taylor Jennings and husband Sheldon, Payton Clark, Rachel Myers and husband Tyler, and Katie Gonzales and husband Anthony; five great grandchildren, Lillie, Hayes, Levi, Luke, and Hudson; two sisters, Judy Skeese, and Kay Johnson, Ohio; and a host of family and friends. He was preceded in death by his parents, Donn Bangle and Ruth Clark; and one brother, Jerry Bangle.
Visitation will be from 1-2 pm, Saturday, November 24th, 2018 at Greenlawn Funeral Home East 3540 East Seminole, Springfield, MO 65809, immediately followed by a celebration of Larry's life at 2:00 pm. Burial will follow at I.O.O.F Cemetery at approximately 4 pm in Marionville, MO. In lieu of flowers, donations can be made to your favorite charitable organization.