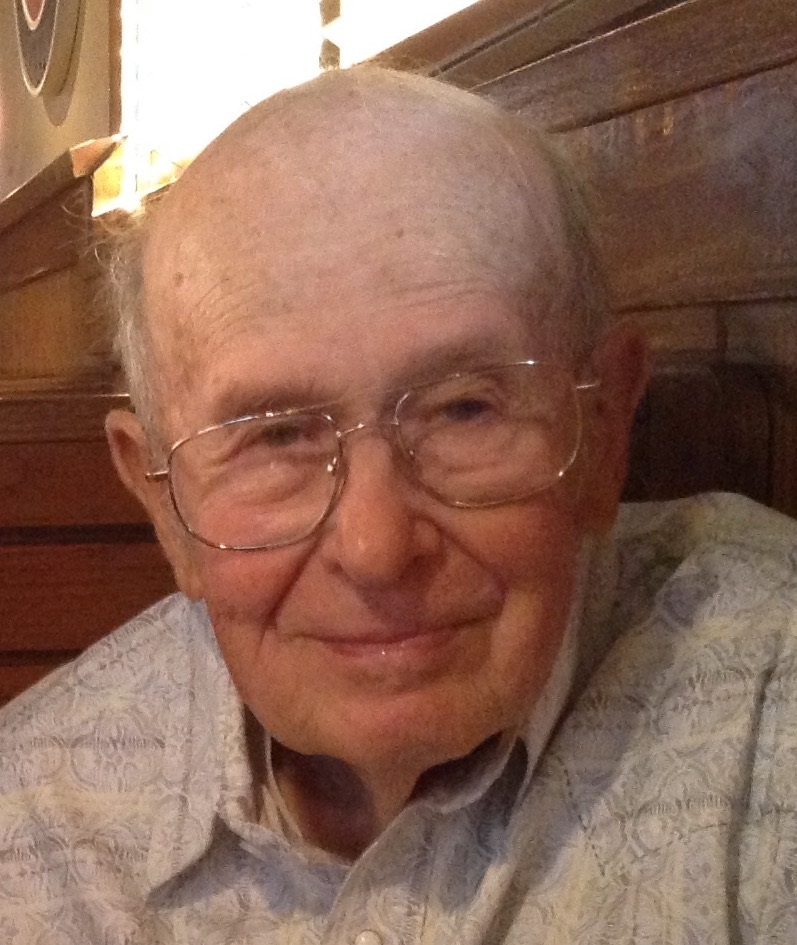 Laurence (Larry) Dale Knepper, 89, of Springfield, MO, formerly of Tarkio, MO passed away peacefully on Friday, December 6, 2019 at Mercy Hospital in Springfield, MO after a brief illness. Larry was born on May 20, 1930 in Maryville, MO, to George W Knepper and Ethel F Obert Knepper. He graduated from Tarkio High School in 1949 and the University of Nebraska College of Agriculture with an Associate Degree in Applied Science in 1951. He remained a passionate Nebraska Huskers fan for the rest of his life. At age 19 he won the Kansas City Open for Clay pigeon shooting. There were more than 100 participants. In his words, “It was windy as heck and I was quick then, I’d get them as they’d come out of trap.”
Larry was a member in the US Naval Reserves and one day he was told he would be taking a cruise. He ended up on the aircraft carrier, USS Kula Gulf, and found himself in the sea off Korea during the Korean conflict. His two week cruise ended up lasting several months and he served in supply before returning to the states.
Larry sat on the board of Directors of Tarkio Pelleting Corporation in Tarkio, MO. He helped build, and in its early years, manage, Feeders Grain Storage, a division of Tarkio Pelleting Corporation. He had many years in elevator management including Checkerboard Grain in Kansas City, MO. He also managed two large country elevators in western Kansas and western Nebraska for CGF Grain and Rickel Grain Companies.
Larry and Delaine Ann Sass were married in 1951. To this union two children were born, daughter, Teresa Ann and son, Allan Dale. Larry and Delaine farmed in rural Atchison County Missouri. Delaine passed away in 1955. Larry then married Mary Lou Morton; they were divorced.
Larry married Nancy Ennis Knepper, nee Cain on July 29, 1978 in Falls City, NE. They moved to Grant, NE where Larry worked as manager of Grainton Elevator in Grainton, NE. An opportunity came to purchase Sidney Sales Agency, a Montgomery Ward Catalog Store in Sidney, NE, which he and Nancy owned and operated for four years. While in Sidney, Larry became an Emergency Medical Technician II and worked with the ambulance crew. He was in charge of critically ill infants who were transported to Denver Children’s Hospital. In Sidney, Larry was in the Lions Club, Elks Club and the Civil Air Patrol. He was a pilot of single engine aircraft, flying mostly at night. In 1986 Larry and his family moved to Springfield, MO.
Larry was an avid outdoorsman. He loved fishing and particularly hunting. He was passionate about turkey hunting. Larry was a Master Gardener. He and Nancy started Larry’s Berries and Nancy’s Greenhouse growing strawberries, raspberries, blackberries, apples and flowers. Larry loved to work in his yard and would spend hours manicuring the grass and planting large gardens. While in the Springfield area he was a leader in the Willard Tigers 4-H club. Oh, did I tell you he loved ice cream. Larry was a past member of the Elks Club in Springfield and the American Legion in Kimberling City. He loved to help cook their Friday night meals. Did I mention, he loved ice cream very much.
Larry is survived by his beloved wife, Nancy of 41 years, and his adopted daughter, Charna Marie Knepper, both of Springfield, MO; daughter Teresa Knepper Smith, husband Bill, of Tarkio, MO; grandson Brett Smith of Dallas, TX; granddaughter Melanie Smith Freeland, husband David of Los Angeles, CA; son Allan, wife Barbara of Clovis, CA; grandson Capt. John Z Knepper of N. Carolina and his wife, Jenna; grandson Zechariah Knepper attending Princeton University; 5 great grandchildren, Savanna and Beckett Smith of Atlanta, GA, Emerson Freeland of Los Angeles, and Luke and Peyton Smith of Dallas, TX.
The family wishes to express our sincere gratitude to the physicians, staff and caregivers at Willard Care Center in Willard, MO, where Larry resided since May 2017, and the physicians and staff at Mercy Hospital, ER and Floor 4C, Springfield, MO. The family suggests memorials in memory of Larry, in lieu of flowers, to the Tarkio Presbyterian Church, 700 Maple St., Tarkio, MO 64491 or the Humane Society of Southwest Missouri in care of Greenlawn North, 3506 N National, Springfield, MO. 65803.
There will be a visitation at Greenlawn Funeral Home North, 3506 N National, Springfield, MO, from 6:00 to 8:00 p.m. on Thursday, December 12, 2019.
Funeral services will be held in Tarkio, MO at the Tarkio Presbyterian Church on Saturday, December 14, 2019 at 1:00 p.m. Reverend Will Ratcliff will be officiating.
Interment with military honors will be at Home Cemetery, Tarkio, MO.