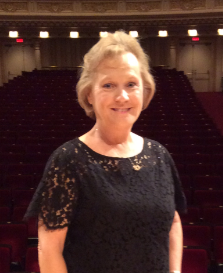 Leasha Gayle Bear, 64, went to be with the Lord, December 23 at 2:30 a.m. in her home where she was dearly loved. Her faith in God and love for family and friends gave her courage to fight cancer the past 14 months that left a final legacy for a life well lived.
Leasha was born in Springfield on March 4, 1955 to Dewey and Nathalie Ramey. She grew up in Fair Grove where she graduated from high school in 1973. She attended Evangel College, majoring in her lifelong love of music and graduated in 1977. She received her Masters from SMS in 1980. Her education led her to a nearly 40 year career teaching music at Willard and the Springfield Public Schools. She loved working with kids and produced not only some wonderful programs but gained their love and respect. It was rare to go out in public and not have a former student approach her. She got the resume thrill of a lifetime when she performed in a 300 voice choir at Carnegie Hall in the 2016 Christmas in New York Concert. The joy of this is experience is evident in the photo above.
Leasha accepted Christ as her savior when she was nine years old. As she grew in her faith she became a woman described in Proverbs 31. One that uses her faith in God along with her talents and abilities to influence family, friends and the workplace. Leasha married Jerry Bear January 16, 1982. It was truly a wonderful and fun marriage. The Bear Family Adventures became a center of joy. One trip wasn’t over until the next one was being planned. They only got better when Justin and Jessica came along in 1988 and 1992. Leasha had one major fault. She was a devoted New York Yankee fan in the middle of Cardinal Nation. She never converted despite her husbands best efforts. She delighted in the grief others gave her while wearing the pinstripes. But she went to Cardinals Spring training, Cardinal games and three World Series games including game 7 in 2011. But her family visited Yankee Stadium with her too.
Leasha led a life of gratitude and caring. She never missed sending a thank you note and loved sending cards of encouragement. She lectured her family before she passed away of keeping a good list of people bringing food and flowers. But she would want to publicly thank the incredible support our family received during this terrible struggle. Our Sunday School Class at Crossway Baptist Church led by Stan and Karen Bisher, Pastor Eddie and Tess Bumpers, our many friends at High Street Baptist Church, our neighbors, the lovable bunch at Robberson Community School with principal, Kevin Huffman, and the Hillcrest Class of 1971. Special thanks to her extraordinary oncologist Dr. Jessica Snider, along with her staff and to all the people at Mercy who helped her- you know who you are.
Leasha joined her mother Nathalie, her grandparents, and many friends in heaven on Monday. She finally got to meet her sister-in-law. She is survived by her husband Jerry, son Justin, daughter Jessica, brother-in-law Ken and wife Sheila, and Dad, Dewey Ramey. Leasha leaves a tremendous void that can be judged by the number of times her husband had to stop and compose himself writing words he never ever wanted to write.
Visitation will be at Greenlawn Funeral Home East from 6:00- 8:00 p.m. Friday, December 27. Services at Crossway Baptist Church, Saturday, December 28 at 11:00 a.m. under the direction of our dear friend, Reverend Sandy Baird. Burial to follow at Greenlawn Memorial Gardens.