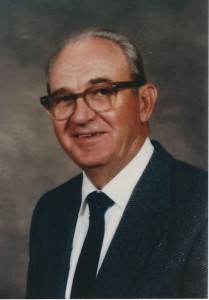 Lee Austin Jr. was born June 1, 1923 in Wright County, Missouri, one of four children born to Otis Lee and Othel Edwards Austin.
He attended Coldwater School and graduated from Hartville High School. During World War II he served in the U. S. Navy as an electrician on LCT 865. After the war, he worked and studied to become a Master Electrician. He became an electrical contractor with his own business, Austin Electric Company.
Before going to the Navy, Lee married Dora Jean Lindsay, of Wright County. After the war, they made their home in Springfield, Missouri and later in Strafford, Missouri where they lived for thirty- five years and raised their family. They had three children, Bonnie Jean, Patty Ann, and Mark. They adopted another son, Mike.
As a young boy, Lee received Jesus Christ as his Lord and Savior and was baptized in Elk Creek, in Wright County. Lee and Dora Jean were active members of Strafford Baptist Church and New Home Freewill Baptist Church. Lee served on the Strafford School Board, was a member of the Strafford Volunteer Fire Department, and raised beef cattle.
Lee is preceded in death by his wife, Dora Jean, his son, Mark, his parents, two sisters and brothers-in-law, Syble and Farris Bowlin and Katherine and Clifford Emmerson, his brother Kenneth and sister-in-law, Lucille Austin, and brother-in-law and sister-in-law Bob and Ethelene Dailey.
Surviving Lee are daughters and sons-in-law, Patty and Robert Ingold, Bonnie and Steve Winter, son, Mike Austin, and sister Charlotte Austin.
Lee’s grandchildren, who all survive him, are Lori Yarborough and husband Ben, Ryan Ingold and wife Andrea, Renee Steele and husband Rob, Kim Jackson and husband Eric, Ben Winter and wife Rebecca, Dillon and Dallas Austin, and nineteen great- grandchildren.
Nieces and Nephews are Radell and Judy Emmerson, Gordon and Anna Emmerson, Elma Jo and Dean Skinner, Rex and Sara Austin, David and Judy Austin, Farris Lee Bowlin, Mike and April Dailey, Mary and Walter Norvell, and Merlin and Marcia Harlamert.
Services for Lee will be 11:00 A.M. Friday, April 29, 2016 at Greenlawn Funeral Home East with interment at 4:00 P.M. Friday at Coldwater Cemetery in Wright County. Visitation will be from 10:00 to 11:00 A.M. prior to services.