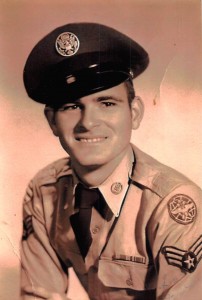 Leon I Greninger, age 87, of Springfield, MO, passed away Thursday, September 10, 2015 at Mercy Hospital. He was born July 20, 1928, in Joplin, MO, to Roscoe and Olive (Lyle) Greninger. Leon was united in marriage to Rosalee Garrett on July 7, 1951 in Eureka Springs, AR. He served in the United States Army Air Corp. and Air Force, serving during World War II and the Korean War. After his service in the Air Force he began his career as a meteorologist with the N.O.O.A., U.S. Weather Service, retiring in 1985. Leon enjoyed traveling, he was known to keep his World Atlas close to him, he also enjoyed reading and watching old westerns, and talking politics. After retiring he began a recycling business, which he called his hobby.
He was preceded in death by a daughter, Donna Rae Greninger; parents, Roscoe Earl and Olive Nell Greninger; four brothers, JP Greninger, JW Greninger, Mont Greninger, and Buddy Greninger; and two sisters, Myrtle Durbin and Garnett Miller Brockman. He is survived by his loving wife of sixty-four years,Rosalee Greninger, Springfield, MO; four children, Richard Greninger, Collene Poppe and husband Lee, Stephen Greninger and wife Mary Jo, and Douglas Greninger and wife Lesley; six grandchildren, Stephanie Maples and husband Steven, Zachary Greninger, Hannah Greninger, Hailie Greninger, Amanda Mc Mains, and Stephen Greninger; three step-grandchildren, Tiffany Dollarhide, Terry Moore, and Susan Moore; two great-grandchildren, Trey Maples and Chance Maples; one brother Holland Greninger; two sisters, June Gilliam and Rita Pauler; numerous nieces and nephews and a host of friends.
Funeral services will be held at 1:00 p.m., Tuesday, September 15, 2015, at Greenlawn Funeral Home North, Springfield, MO with Rev. John English officiating. Burial will be held in Missouri Veterans Cemetery, Springfield, MO. Visitation will be held from 12-1 p.m. on Tuesday, September 15, 2015 at Greenlawn Funeral Home North. Memorial contributions may be made to the St. Judes Children’s Hospital or D.A.V. Services have been entrusted to Greenlawn Funeral Home North, Springfield, MO.