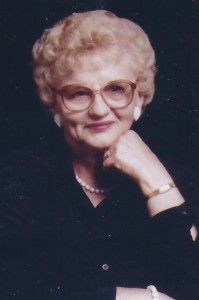 Leona Elizabeth Schrader, 98 of Springfield, Mo. Died peacefully at 12:38 on June 24, 2015. She was born January 17, 1917, to Margaret and Elmer Hilfiker in Bloomfield, Nebraska. She graduated in 1935 from Smith Cotton High School and went on to graduate from Waynes State College in Nebraska.
Leona, husband Rex and two children Bob and Bonnie moved to Sedalia MO. in 1942 and finally settled in 1948 in Springfield Mo.
She was married to her husband Rex P. Schrader for 63 years. She was a member of St. Paul United Methodist Church where she was active in many of the church organizations. She was active in both the church choir and also a member of the Sweet Adeline ladies choir.
Leona’s husband Rex was a lifetime members of the Elks Club 409, and Leona a lifetime auxiliary member.
Leona retired in 1979 after she had worked many years for Netters Store. Leona and her husband Rex loved traveling and traveled extensively for many years to various places after her retirement.
Leona was a volunteer at Cox Hospital for many years. She belonged to and was active in many organizations and clubs.
Leona was preceded in death by her parents; three brothers Perry Hilfiker, Homer Hilfiker and Norman Hilfiker and sister Leitha Vlcan of Lincoln Nebraska.
She is survived by two sisters; Dorothy Lange of Little Rock, Ark. and June Peterson of Bloomfield, Neb.; her daughter Bonnie Lou Schrader of Springfield, MO. and son Bob E. Schrader, wife Linda Schrader and grandson Robert Tyson Schrader, of Billings. Also many nieces, nephews, other relatives and friends.
Visitation will be at 1:00 p.m. Friday, June 26, 2015 followed by the funeral services at 2:00 p.m. in Greenlawn Funeral Home East at 3540 East Seminole. Burial will follow in the mausoleum in Greenlawn Memorial Gardens.
Memorial may be made to: Brenda Abshure, Office of Gift Planning, St. Jude Children’s Hospital. 501 St. Jude Place, Memphis, TN 38105 Phone: 1-800-395 1087 www.stjude.org