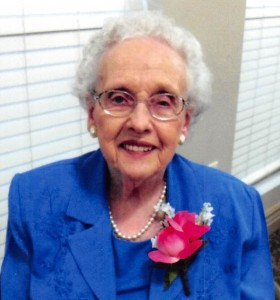 Leona Elsie (Trantham) Richerson, born March 9, 1922, passed away peacefully on Sunday afternoon, June 12, 2016 with family at her bedside. She was united in marriage to Vaughn Richerson on June 7, 1947. They lived and worked on their farm near Fair Grove, MO for fifty years. Vaughn preceded her in death in 2001. She is survived by their three children: Marie Biggers, Fair Grove, MO; Tony Richerson, and wife, Annette, Billings, MO; and Mary Henry, and husband, Michael, Republic, MO. Also surviving are nine grandchildren: Brenda, Steve, and Craig (Tracy) Biggers; John, Daniel (Amie) Richerson, and Crystal (Mike) Post; Michael Paul (Jennifer), Jason (Jessica), and Christopher Henry, and twelve great grandchildren. She is also survived by three sisters-in-law and two brothers-in-law, as well as many nephews and nieces. Leona was preceded in death by her parents, John Tony and Martha Annie (Tracy) Trantham, brothers Cecil and Truman Trantham, and infant sister, Marie. Also preceding her in death are one grandson, a son-in-law, five sisters-in-law and four brothers-in-law. Leona accepted Jesus as her Savior at age ten at Cedar Bluff Baptist Church. She and Vaughn were faithful members at Cedar Bluff for many years. She played the piano by ear, wrote church articles in the newspaper, and served in many other roles in the church. She loved her family deeply and prepared many delicious meals for them over the years for which she will be especially remembered. She had a passion for gardening and flowers which she was able to enjoy the majority of her life. Special thanks to the staff at the Gardens Assisted Living Facility for the tender loving care they provided where she spent the last 17 years of her life. She considered the staff and residents part of her family. Her passing leaves a huge hole in the hearts of many, however, we rejoice in knowing heaven has gained another beautiful angel. Services are under the direction of Greenlawn North. Visitation will be held at the funeral home Tuesday, June 14, from 6 to 8 pm. Funeral services will also be held at the funeral home on Wednesday, June 15 at 10 am, with burial to follow in Cedar Bluff Cemetery, Fair Grove, MO. Donations may be made to the American Heart Association in lieu of flowers if desired.