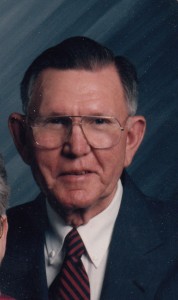 Leonard Leon Jackson was born June 13, 1927 to Robert and Mildred Jackson in Christian County, Missouri. He was called home to his Lord and Master on March 6, 2015.
Leonard was preceded in death by his wife of 60 years, Dorothy; by his parents, Robert & Mildred, and his two brothers, Harold and Ben.
Leonard was a member of New Bethel Primitive Baptist Church all his adult life. He served as a deacon and it was the church that gave him faith and hope. Leonard was retired from Herrman Lumber Company after 40 years of service.
He is survived by a daughter, Brenda Keck, of Springfield; a son, Larry and wife Karen of Raymore, MO. He has two grandchildren, Chris Keck and wife Jude of Allen, TX, and Jennifer Jackson of Raymore, MO; and eight great-grandchildren.
He leaves behind a sister, Nancy and husband Earl Smith of Springfield; a brother, Joe, of Springfield; a brother, Roger and wife Fran, of Bois D’Arc, MO; and a brother, Bob and wife Louisa, of Nixa, MO; along with a host of nieces and nephews and friends.
He loved his Church and family and wanted only the best for everyone. He will be greatly missed.