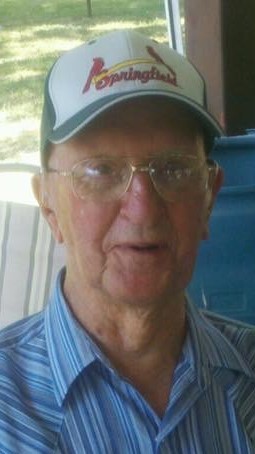 Lloyd R. Cornell passed away February 21st, 2019. He was 101 years old, a good man, who lived a good life. Lloyd was born May 19, 1917, on a farm near Ballard, Missouri, the second child of Edith Hughes and Hal Cornell. On March 14th, 1935, he married the love of his life “that pretty little Ruddell girl” Juanita Faye. They were married 66 years until Juanita’s death in 2001. After Lloyd’s discharge from the army, the family: Lloyd, Juanita, daughter Donna Faye, sons Ken and Ron moved to Springfield. Lloyd worked for Frisco until he retired in 1979. Lloyd and Juanita enjoyed retirement and volunteered with Meals on Wheels, RSVP and the Northview Senior Center. Lloyd left his home, where he has lived for the last 68 years and moved to the Cambridge in Springfield where he lived until 2016 when he moved to Castlewood.
Lloyd was an ardent Cardinal fan and he loved a good card game. He was an active and faithful member of Pathways Methodist Church.
A much-loved father, grandpa, and great grandpa, he was preceded in death by his parents Edith and Hal Cornell; sister Edna Belk; brothers Hal Cornell Jr. and Don Cornell and wife Juanita Cornell.
He is survived by a daughter Donna Barner of Springfield; sons Kenneth Cornell (Martie) of Nixa and Ron Cornell (Karen) of St. Peters, Missouri; sisters Thelma Wheatley of Butler, Missouri and Ruby Cornell of Kansas City, Mo. He is also survived by grandchildren Terry Barner (Rhonda) of Rolla, Missouri; Tina Schneider of Springfield, Missouri; Tamara Barner of Longmont, Colorado; Chris Cornell (Amy) of Nixa Missouri, Cindy Daughtry of Springfield, Missouri, Susan Cornell of Branson, Missouri, Sheri Vandermolen (Darren) of San Diego, California as well as great grandchildren Amanda and Rachel Barner, Nicole Schneider and Kylee Daugherty.
Funeral Arrangements are as follows:
Visitation:
February 26, 2019 10-11a.m. with funeral and Interment to follow at Greenlawn Memorial Gardens.