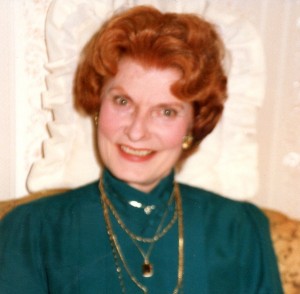 Lodene Hilton Jones, born November 27, 1922, and left this earthly home for a far better place on the afternoon of September 30, 2015. She joyfully joins a multitude of friends and family who have gone before her including her loving husband of 64 years, Stanley K. Jones; her father, Raymond Hilton; and her mother, Opha Hendrix Hilton. She leaves, to miss her dearly, her son and his wife, Larry H. and Linda of Springfield, and her grandson, Scott R. Jones of Hays, Kansas, along with many cousins and dear friends.
After graduation, Lodene worked for the Frisco Railroad, KWTO radio, and Dr. Langston. She later enjoyed several jobs in retail in Springfield, but the job she most enjoyed was a homemaker for her husband and son. She had an angels touch with pies and bread….just ask her son and grandson. Lodene grew up in a family with no siblings, but so many cousins to fill that void it was as if they were siblings. She would tell you her childhood was ideal: wonderful loving parents, many cousins to enjoy summer days and holidays with in rural Springfield, and then later a husband who she loved and who loved her for 64 years, as well as a son, daughter in-law, and grandson who knew her to be the perfect example for how to live their lives! Lodene and Stanley had homes in Monett, Springfield, and Ash Grove, and as Stanley’s career took him to new locations and challenges he did not worry about home – for anywhere Lodene settled with him she created a place of beauty and grace. Together, they enjoyed every neighborhood they lived in and made lasting friendships in each and every location. In recent years Lodene formed a special friendship with her “Skipbo” buddies and their Tuesday gathering meant so much to her as well as her friends who walked the mall with her and helped her stay active.
Lodene remained friends with fellow graduates from Willard High School, class of 1940, sharing with her family many stories of their escapades during high school and relaying the great fun they always enjoyed with one another and even though it has been 75 years she was always eager to hear from the “girls” who survived. Lodene was always proud of the school and the accomplishments of all those who followed, for this reason we ask that in lieu of flowers you make a contribution to Willard Children’s Charitable Foundation 500 Kime Street Willard, MO 65781 in memory of Stanley and Lodene Jones.
Lodene was a member of Wesley United Methodist Church and for many years enjoyed the fellowship of this church family. Scriptures asks the question “Who can find a virtuous woman for her price is far above rubies?” our lives were enriched by knowing a truly “virtuous woman” – Except those of you who knew her know her choice of jewels would be amethyst since they are purple and not rubies! She graced her home and all those who entered with Kindness, gentleness, and goodness. She believed if you couldn’t say something good about someone don’t say anything at all. Her grandson, Scott, said it best “she was one of the most kind, considerate, and compassionate people that you could ever know”. Hers was truly been a life well lived! Services will be held on Wednesday, October 7, 2015, in the church where she grew up, Elwood United Methodist Church. Services are at 2:00 p.m. with family visitation one hour before the service. Services have been entrusted to Greenlawn Funeral Home South, Springfield, MO.