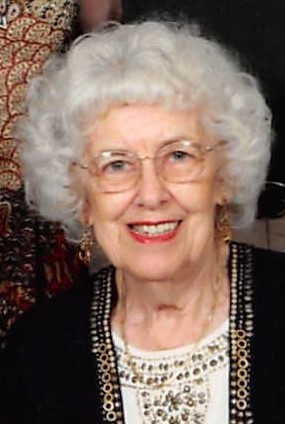 On January 15, 2020, our precious mother Lois Jane Barham entered heaven and was reunited with Jack her high school sweetheart and husband of 65 years. She was 85 years old.

Lois was born on September 24, 1934 in Joplin, Missouri to James William Pendleton and Grace Irene (Browning) Pendleton. She had two sisters and one brother: June, Margaret and Jimmy, all of whom preceded her in death.

In 1939 Lois and her family moved to Duenweg, Missouri to their new home which remains in the family to this day. It was in church and school where she first met Jack. On Thanksgiving Eve in 1951 they had their first date and were married in 1953. After living in California while Jack was in the Navy, and again in Duenweg, they moved to Springfield in 1959. That was where they raised their children: David, Deborah and Dan.

Lois was a “stay at home” mom until 1969. She then did volunteer work for the Springfield Public Schools and later became a full time employee as a school secretary at Delaware Elementary. She retired in 1990 to help care for her parents.

Lois and Jack were long time members of both Temple Baptist Church and Ridgecrest Baptist Church. She taught Sunday School and Bible studies in both churches and always sang in the choir. Together they developed many long lasting friendships that they always cherished. She and Jack enjoyed traveling and were able to see much of the world together. They often traveled with her sister and brother –in –law Margaret and JD Pierson. They were avid fans and season ticket holders of Drury and MSU basketball for many years.

Mom was a devoted wife, mother, grandmother, daughter, sister and friend. She always strived to do her best and had many long term close friendships.

She is survived by her children, David Barham, Deborah Innes, and Dan Barham, grandchildren Paul, Matt, Jack, Jane and Carrie. She also has one sister- in-law Peggy Bybee, nieces and nephews and her best friend Janice Wallace.

Lois spent her last two years living at The Baptist Home in Ozark and especially appreciated the staff and friendships she developed there.

In lieu, of flowers a donation can be made in Lois’s name to The Baptist Home benevolent fund. The address is: 101 Riggs Scott Lane, Ironton, Missouri 63650.