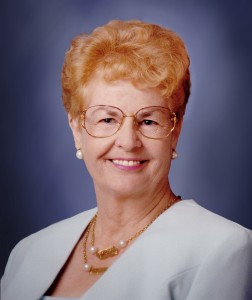 Lola McConnell passed peacefully in her sleep on Monday, August 3, 2015. She was 86. Born as Lola Mae Huetfle on March 22, 1929 to Gus and Dora Huetfle in Eustis, Nebraska, she grew up on the family farm with her brothers Karl and Eddie and sisters Elmyra, Dora and Doris. A natural beauty and gifted singer, she was always generous with her smiles and laughter.Lola graduated from Wesleyan University in Lincoln and began her teaching career in David City, Nebraska where she met her husband Kenneth Lynn Shuck.Married in 1951, they made a home for their three childrenin North Platte, Nebraska and then moved west to Phoenix in 1962. It was a great adventure for the whole family and Lola continued to blossom in the Arizona desert as a mother, teacher, and artist. She sang in the choirs at the United Methodist Church and in later years with Trinity Methodist Church.
Lola cherished her children David, Terri, and Lorie and grandchildrenDavid Paul, Amy, Tim, Allison and Caity. We all felt deeply loved and supported by her, unconditionally. Her love was the anchor in our lives.
In mid-life, Lola earned a Master’s Degree in Arts Education from Arizona State University. Art was a great joy in her life and an inspiration for her as an educator.Lola taught elementary grades in the Phoenix public school system for 29 years. In retirement, Lola took up china painting, a legacy imprinted by her own mother’s practice of this refined craft.
Lola participated in many social and church organizations. She enjoyed socializing with her sorority sisters and traveling with them and other friends to great places around the U.S. and world, including Turkey, Greece, Israel, the Caribbean, Japan and her ancestral homeland of Germany (twice). She was a seeker and maker of beauty.
Her first marriage ended in divorce. In 1998, she married Jim McConnell. For fifteen years, they shared their time together in both Nebraska and Arizona.
Lola embodied the light of kindness and love to her family and caretakers every day. In recent years, she was slowed down by a series of strokes, but her smile and sweet essence continued to shine through.
Lola is preceded in death by her first husband Ken Shuck and second husband Jim McConnell, her brother Eddie Huetfle and sister Elymra Huetfle. Lola is survived by three children from her first marriage: David Shuck of Glendale, Arizona; Terri Shuck of Takoma Park, Maryland; and Lorie Larson of Springfield, Missouri; five grandchildren, and two great grandchildren; her brother Karl Huetfle of Cozad, Nebraska; and twin sisters Dora Livingston of Broadwater, Nebraska; and Doris Frazer of Ft. Lupton, Colorado.
Funeral services will be held on Saturday, August 15 from 11 am to 12:00 pm at the Methodist Church in Eustis, Nebraska.