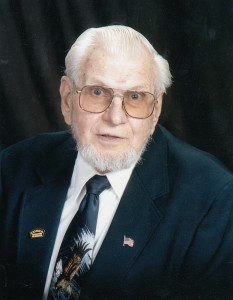 Rev. Louis D. Green, 83, went home to be with the Lord on January 1, 2015. He was born October 16, 1931 in Denver, CO. to William Green and Florence Green (Dunlap). He married Nina Porter on October 4, 1953.
Rev. Green pastored in the Assemblies of God over 45 years in Kansas, Colorado, and Idaho. He was also a builder by trade. He and he wife were heavily involved in the Assembly of God RV ministry, in which they would travel to assist in building churches or help churches with an addition to their building or remodel an existing building. In his younger years he enjoyed hunting, and as the years went on he loved fishing and watching war movies. He proudly served in the United States Navy including the Korean War.
Rev. Green was preceded in death by his parents.
He is survived by his loving wife of 61 years Nina; son: Rev. Stephen and his wife Cyndie, daughters; Marian and Nina L. Green, a brother; William Green, two sisters: Donna Munger, and Lydia Hazelrigg, two granddaughters; Stephainie and Amanda Green.
Graveside services will take place on Tuesday, January, 6, 2015 at the Missouri Veterans Cemetery at 2:00 pm with full military rites.
There will be no public visitation.