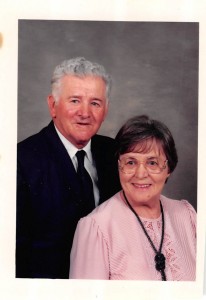 Louise Annabell (Popejoy) Dishman, 91 years, 10 months, 12 days went to be with her Savior on November 4, 2015. She was born to the late Frank and Golden (Bass) Popejoy on December 23, 1923.
Louise married James A. Dishman, May 29, 1945. Over the years, she was a caregiver in her home to numerous family members.
The last 22 months she resided at the Strafford Care Center enjoying all the activities until her stroke on August 31st.
She is survived by her daughters; Jane (Jim) Love and Jeanette Forney of Strafford; grandchildren, Richard, David, Laura, Rachel, Natalie and Angela; eleven great-grandchildren and 4 step great-grandchildren.
Graveside services will be Sunday, November 8, 2 p.m. at Dishman Cemetery, Strafford, Missouri.