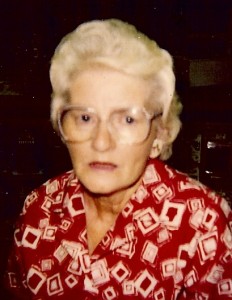 Lovan Dena Riggan, age 89, of Aldrich, MO, passed away Sunday, March 15, 2015, in her home. She was born August 22, 1925, in Wishart, MO, to Thomas and Amanda (stephens) Neil. She was united in marriage to James H. Riggan October 8, 1961. She loved to garden, embrodoring and quilting. She enjoyed visiting her friends, and nieces and nephews (who knew her as aunt Toad), she would have been considered to be fisty.
She was preceded in death by her parents; her husband James H. Riggan; two brothers and two sisters.
She is survived by her daughter Shirley Kane and husband Henry of Aldrich, MO; three grandchildren: Crandell Kane of ND, Raeanda Martel of Witchita, KS, and Tony Kane and wife Rhonda Davis of Colwich, KS; five great grandchildren: Ashley Schillings and husband Ben of Barrtelville,MN, Ranson Martel of Liberty, TX, Remington Martel and wife Hannah of Nome, TX, Jacy Kane of Colwich, KS, and Tory Kane of Colwich, KS; a sister in-law Lorene Neil of Bolivar, MO; as well as many other relatives and friends.
Funeral services will be held at 1:00 PM Thursday, March 19, 2015, at Pitts Chapel. Burial will follow at Pleasant Ridge Cemetery. Visitation will be held from 6:00 to 8:00 PM Wednesday, March 18, 2015, in the funeral home. Arrangements have been entrusted to Pitts Chapel Bolivar, MO.