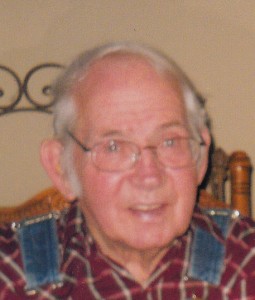 Lowell Edward Kendrick was born in Niangua, Missouri, to Claude and Ethel Kendrick on September 3, 1922. He is the second of four children born to that union. He completed nine years of school but quit school to help at home as needed.
Lowell was a veteran of World War II, serving from 1942 – 1945 in the United States Army. He was awarded two battle stars, serving in both the African and European Theaters of War. On June 6, 1944, D-Day, Lowell landed with his Army division on Omaha Beach, Normandy, France. He helped liberate Paris and fought in the Battle of the Bulge. He helped liberate concentration camps in Germany, and his division went on to help defeat Berlin and all of Germany. Lowell rarely talked about the war, but he was a true patriot and loved his country.
While working at Bissman Manufacturing Company in Springfield, Lowell met the love of his life, Mable Mikesell in March 1946. Romance blossomed that hot summer as they made furniture together in the days and courted at night. They were married six months later on September 21, 1946, by Lowell’s uncle, Rev. George Deckard. Children born to this union are Joyce Kendrick Hubbs, Gayle Kendrick Powell, and Jan Kendrick Bruner.
Mable began attending Eastside General Baptist with her infant daughter and only had to slam the backdoor of their home three Sundays until Lowell attended church service with her. He was soon saved at the Eastside altar in April 1954. Lowell was called into pastoral ministry in 1962 to his one and only pastorate at Northside General Baptist, Springfield, where he pastored 25 years and while also employed at Toombs and Company. Under his pastoral ministry, the church grew spiritually and in number. As the church expanded, he led them through building construction. During the next 25 years, many people were saved and baptized, and the church flourished. Upon retirement from pastoral ministry, Lowell continued serving in hospital ministry, preaching as needed, and assisting in various leadership capacities at Eastside Baptist. At the time of his death, he and Mable were attending Life360 Calvary, Springfield.
Lowell was an avid gardener and was known for his super-large tomatoes. He was always busy with his strong hands, building or repairing. He loved his wife and girls with a deep love and would have given his life for them. He still needed to know that his girls were doing okay each day and was known for his parting phrase, “Call me when you get home, and let me know if you need anything.”
Upon Lowell’s heavenly arrival, he was greeted by his parents and two brothers, Loyd and Howard Kendrick, an infant grandson Matthew Hubbs, and his loving granddaughter Amber Powell. He is survived by his loving wife Mable, one sister Nellie Jackson, one brother Bill Kendrick, and three daughters and sons-in-law Joyce and Brent Hubbs, Gayle and Jeff Powell, and Jan and Marshall Bruner. Other survivors are five grandchildren, Sherri and Jonathan Hubbs, Ryan Powell, Meagan Bruner Rachel, and Micah Bruner; and six great grandchildren and one soon to be born. He is also survived by a host of nephews and nieces.
Lowell will be missed by all who knew him. Our great hope and promise from God is that we will see him again soon.
Visitation will be Friday evening, June 26, 2015, 5:00-7:00pm, at Greenlawn Funeral Home North. Funeral services will be on Saturday, June 27, 2015, 1:30pm at Greenlawn Funeral Home North. Lowell will be buried with Military Honors following the service in Greenlawn Memorial Gardens.