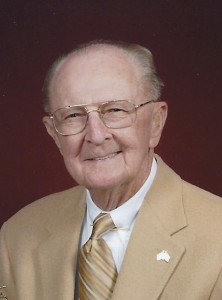 Lowell Alexander, 95, passed away Monday, August 24, 2015. Lowell was born May 26, 1920, in Nichols Junction, MO to C.R. and Dilla (Samples) Alexander. However, Fred E. Thompson, became “father,” mentor, and beloved person to Lowell upon Fred and Dilla’s marriage in 1942. Lowell graduated from Central High School in 1938 and Draughon’s Business School. Gladys Ann Walters and he were united in marriage in Springfield on May 31, 1942, before moving to St. Louis. In 1944, Lowell was drafted into the U.S. Army, he attended OCS, and was deployed to the Philippines. Upon returning to St. Louis, Lowell remained in the Army Reserves until 1960, achieving the rank of Captain. His career included twelve years at Gilbert Buick, then concluded at Lemay Bank and Trust Company as Vice-President. During those years, he also became active in Kiwanis.
After Lowell’s wife of 46 years died, Lowell married Nancy Stark in 1990. She preceded him in death in 2013. Survivors include Lowell’s daughter, Sandra (John) Glasner; granddaughter, Angela (Matt) Grussing; great-grandchildren, Josie, Trevor, and Allison Grussing; nephews, Nick (Kathy) Corsentino and James (Ruth) Corsentino; half-brother, Joe (Carolyn) Alexander; and half-sister, Grace Ruth (Don) Petty.
Services will be at 3 PM, Sunday, August 30, 2015, at Greenlawn East Funeral Home (Springfield), with visitation from 1-3 PM. Burial will be at 10 AM, Monday, August 31, 2015, at the National Cemetery in Springfield. In lieu of flowers, contributions can welcomed to Kiwanis Club of Ozark Empire, P.O. Box 5032, Springfield, MO 65801 or to Nuestros Niños, P.O. Box 30656, Knoxville, TN 37930.