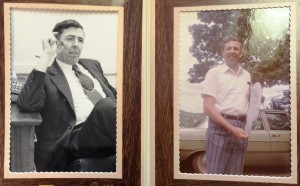 Lyle E (Dale) Matthews passed away February 5, 2015.
Lyle was born near Plato, Missouri on February 2, 1925 to Ruben Arthur Matthews and Gladys Elsie (Crismon) Matthews and lived in that area until he went into the Army, where he served two years mostly in Germany until the end of World War II.
He married Effie Lou Mallard on June 1, 1948 and they moved to Rolla, MO where he graduated with a BS degree in Engineering. He then took a job as a civilian employee of the Navy at Point Mugu, California where he enjoyed the opportunity to further his education at the Naval Postgraduate College in Monterey, California (1958-1959) and later at the National War College (1973-1974). He continued taking work-related classes through his career as they were offered on base. He was issued 11 patents during his career. He received an honorary degree in aerospace engineering from UMR.
Lyle’s interests outside of work were church, family, fishing, bowling, computer games, and the Masonic and Elks lodges. He was married for 65 years and had two boy s- Edwin Dale (born 1951, died 2012) and Roger Allan (born 1956). He was very proud of his sons – both engineers and accomplished musicians. Lyle is survived by his wife, Effie; one sister, Carmie Lambeth; one brother, Jesse Matthews; one son, Roger; two daughters-in-law, Evean and Susie Matthews; seven grandchildren; and eight great- grandchildren.
He was preceded in death by his parents; one sister, LaVerne Edwards; and one son, Edwin Matthews.
Memorial donations may be made to the charity of your choice.
No services are planned at this time.