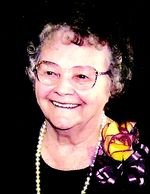 Mabel (Tiff) Leibbrandt Borden, 96, Springfield, Mo., formerly The Dalles, Oregon, was born on July 10, 1913 in Cheyenne County, Kansas and passed away on August 15, 2009 in Mercy Villa, Springfield, Mo. She married Reuben Leibbrandt in 1931 and Albert Borden in 1952 in Kansas and Nebraska respectively. Mabel was a homemaker and a member of the Assembly of God in The Dalles, Oregon and Parkcrest Assembly in Springfield, traveling with the Oasis group She was honored by her family with parties/family reunions for her 80th, 90th and 95th birthdays. Through the years Mabel has expressed her creativity in many ways. She enjoyed sewing, making wedding cakes, photography and hand tinted photos while in Oregon. After moving to Springfield in 1978, she started painting landscapes, folkart painting on wood, embroidery, quilting, sewing clothes and dolls, and doing alterations for people. She loved her family, prayed for them, and worried about them whether near or far. Her faith was an important part of her life, reading her Bible daily and watching Sunday morning programs after she was no longer able to attend local services. She had a love for books and horses, and spent her last months sitting in the sunroom reading when possible. Mabel was independent living in her own apartment up to the final 6 months when she moved in with her daughter, Judy’s, family. We’ll miss her smiles, sense of humor, and stories of life on the farm in Kansas. Even though she started losing her short term memory, she could still relate stories of her horses, siblings, children, and the trials. Mabel even wrote a story about her mother’s life in Kansas. She will be greatly missed in our lives, but we know she’s celebrating in heaven with her savior and many friends and family. She was preceded in death by parents, Fred & Elsie Tiff; brothers, Freddie and Wayne Tiff; husbands, Reuben Leibbrandt Sr., Albert Borden. She is survived by her children, Kenneth and Alice Leibbrandt, David and Marcia Leibbrandt all of Philippines, Donna and Marvin Zimbelman of Kansas, Reuben and Jan Leibbrandt of Oregon, Judy and Virgil White of Missouri; step-children, Alan and Cheryl Boyson South Dakota, Lorraine and Charles Draper of Minnesota; 22 grandchildren; 27 great-grandchildren; six great-great-grandchildren; brother, Frank and Mercle Tiff of Colorado; sisters, Beulah Stull of Nebraska, Ethyle Sampson of Oregon, Frances Schauer and Esther Tiff sister-in-law both of Kansas; many nieces; numerous cousins; and many friends. Funeral service will be held in Greenlawn Funeral Home South, Wednesday, August 19, 2009 at 1 p.m. with burial following in Slagle Cemetery, Slagle, Mo. Visitation will be held, August 18, 2009 from 6 to 8 p.m. in the funeral home. Memorial donations may be made to the Salvation Army or charity of your choice. She will be greatly missed in our lives, but we know she’s celebrating in heaven with her savior and many friends and family.