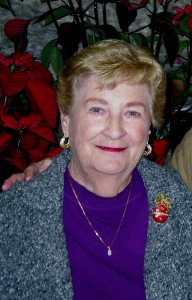 Marguerite Anne Ewing, age 94, of Springfield, Missouri, grandmother and great-grandmother of 3, was reunited with her husband, Joseph Burchfield Ewing, on Saturday, January 17, 2015 at 8 p.m. “Peggy” and “Joe” as they were known, raised twin boys. A son, James (& Sherry) have three children, and three great-grandchildren. A son, Charles and partner Kent. Peggy has a brother and sister and their extended families.
Peggy’s greatest joy was having her growing family together, sharing meals, and laughter. Peggy’s other joy were traveling, bridge, and golf.
Peggy volunteered throughout her life. Too numerous organizations to list. A common phrase associated with her was “such a lovely lady!” Being a person of great faith, Peggy will have a memorial Mass. Date and time to be announced. Services have been entrusted to Greenlawn Funeral Home South.