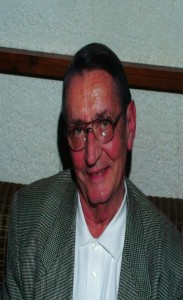 Marion E. Wilkins age 80, of Springfield, MO passed away on October 21, 2015. He was born on May 20, 1935 to Harry and Inez Wilkins in Concordia, Kansas. He was married to Carol Wilkins, the “love of his life”, for 46 years who passed away in 2013. They are holding hands forever now! Marion was a 32nd degree Scottish Rite Mason. He enjoyed golfing, bowling and skeet shooting. Marion and Carol loved to travel, especially on their trips to Hawaii. Marion was a skilled meat cutter who worked for Dillon’s Grocery. He also worked at Midwest Security for a number of years.
Marion was proud of his American Indian Heritage. He belonged to the Delaware Tribe.
Marion is survived by one daughter in Colorado, Kim Hicks; three step-daughters: Jacque Cheng and husband Mark of Danville, California; Kathy Thomas of Marshfield, Missouri; and Sharon Thomas-Parks and husband Joe of Columbia, Missouri; grandchildren: Shannon Cheng, Brandon Cheng, Duncan Parks, Emily Parks, and Alex Parks.