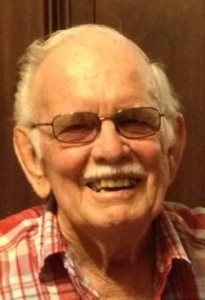 Marion E. Wilson, “Weed,” passed away peacefully on Friday, February 19, 2016, at his Strafford home. He was born on August 17, 1927, in Springfield, MO, to Brian and Mabel (Potter) Wilson.
Marion spent his young years in the Morgan area where he first saw the love of his life, a young Dottie Jean Deckard of Grovespring, MO, running across a church yard. He knew that day that they would one day be together. They were married in Mountain Home, Arkansas, on August 15, 1951.
Marion joined the Army and served in Korea. He later joined the Navy where he was stationed in Guam and Alaska.
Marion learned the trade of auto body repair while working at Crumps in Springfield, Missouri. He made a lifelong career of being an expert auto body man at Dodson Williams Automotive. One of his greatest accomplishments was his purchasing Dodson Williams with his partner and lifelong friend, Ervil Climer.
He was preceded in death by his parents, his wife of 56 years, Dottie Jean Deckard Wilson and grandson, Almus “Hoss” Wilson, and by his sister Betty Wilson Barker and his brother Francis Wilson?
He is survived by his brother Marvin and his wife Jean Marcum Wilson of Longmont, CO. He is also survived by his son Rick Wilson and Annette Evans of Springfield, MO, and other son Randy “Grady” Wilson and daughter- in- law, Donna (Kiser) Wilson of Strafford, MO. He is also survived by his grandchildren and their spouses; Erin and Tim Midyett of Lafayette, CO, Ericka Wilson of Springfield, MO, Georgia and Chris Cable of Springfield, MO, and Ashley and Heath Berg of Columbia, MO. His great grandchildren were his pride and joy; Wilson, Harper and Violet Midyett, Lafyette, CO, and Owen Cable, Springfield, MO, and he was excited to learn at Christmas of another great granddaughter on the way. Marion’s greatest joy was spending time with friends and family.
Weed will always be remembered for his love of meeting and getting to know people, his unending optimism and his integrity.
Services for Marion will be at 1:00 P.M. Wednesday, February 24, 2016 at Greenlawn Funeral Home East with interment to follow in Greenlawn Memorial Gardens. Visitation will be from 6:00 to 8:00 P.M. Tuesday in the funeral home.
Memorial donations may be made in lieu of flowers to the VFW post 3404 1136 East Atlantic Springfield, MO 65803