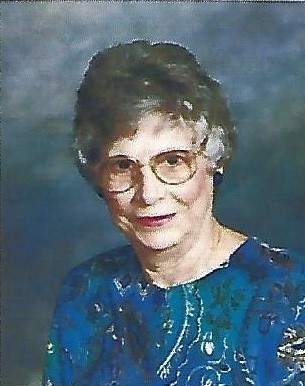 Marjorie A. Smitley, 90, of Springfield, went to be with her Lord and Savior on February 5, 2019. She passed away peacefully in her sleep following a long battle with Alzheimer’s Disease.
Marge was born May 13, 1928 in Springfield, Missouri to Fred W. and Grace Steury, and graduated from Strafford High School. She found employment at J.C. Penney as a model and met her future husband, Philip E. (Gene) Smitley. They were married on June 19, 1949. Not long after marriage Gene began working for Zales Jewelry Company and eventually moved to St. Joseph, Missouri then on to Sioux City, Iowa. It was during their time in St. Joseph that Marge joined Gene at Zales working in the office. She continued with Zales until her retirement. Besides her commitment to her work, she was devoted to her children, grandchildren and great-grandchildren. She enjoyed sewing, knitting, crochet, reading and playing card games, however she would put them all away for the joy of working outside in her yard. Her love for golf stayed with her through the confusing years of her illness and was a frequent topic of discussion.
Marge was a long-time member of Central Assembly of God. She often served in the nursery and in later years helped to prepare the church bulletin.
Marge is preceded in death by her husband, parents, three sisters, four brothers and a great-grandchild.
She is survived by her three children: Michael and wife Pam Smitley of Houston, Texas, Debbie and husband Michael Mills of Highlandville, Missouri, and Philip Smitley of Phenix City, Alabama. Marge has three grandchildren: Matthew and wife Emily Mills of Willard, Missouri, Brady and wife Cathy Smitley of Nashville, Tennessee, and Marissa and husband Phillip Schroff of Springfield. She also has five great-grandchildren: Noah, Brynlee, and Liliana Mills and Shiloh and Erik Schroff.
Services for Marjorie will be a graveside service at 11 a.m. on February 8, 2019 at White Chapel Memorial Gardens, 5234 W State Highway EE, Springfield, Missouri. A visitation will be held from 6 – 8 p.m. at Greenlawn East Funeral Home, 3540 E Seminole, Springfield, Missouri on February 7, 2019.