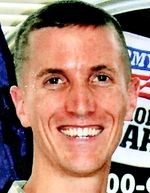 Mark Ray Turner, 32, Rogersville, Mo., was born August 6, 1977, in Chestertown, Md. He graduated from Red Lodge High School, Red Lodge, Mont., in 1996. Mark served in the U.S. Army, in Ft. Bragg, N.C., from 1996 to 2000. He was currently serving in the Missouri Army National Guard. On September 3, 2005, he was united in marriage to Regina Turner. Mark was a member of Red Lodge Community Church, Red Lodge, Mont. He received numerous military awards and medals and enjoyed running, cycling, and spending time with family and friends. He was preceded in death by his grandparents, Virgil and Ruth Turner, and Paul and Viola Everett. He is survived by his wife, Regina Turner; parents, Ray and Sue Turner; step-daughters, Sesily Matthews and Alexis Twigg; sisters, Wendy Martin and husband, Rob, and Christy Turner; and nieces and nephews, Calvin, Erika and Nathaniel Martin. Funeral services will be held in Greenlawn Funeral Home East at 11:30 a.m. Tuesday, November 24, 2009, with burial following in Missouri Veterans Cemetery, at 1 p.m. Visitation will be held in the funeral home from 6 to 9 p.m. Monday, November 23, 2009. The family suggests memorial donations be made to a charity of your choice.