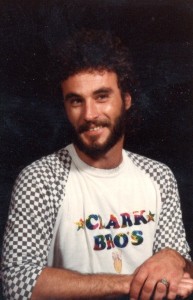 Mark Wesley Clark, 61, passed away Tuesday, February 10, 2015 in Springfield, Missouri. Mark was born October 24, 1953 to Walter E. Sr. and Adeline Clark in Springfield, Missouri.
He was preceded in death by his mother and father; and two brothers, Wally and Tom. Mark is survived by his brother, Jim; and his four daughters; Tobi, Mary, Megan, and Kelsie, 7 grandchildren, and numerous aunts, uncles, nieces, and nephews.
Mark was a talented musician who performed region-wide since the age of 14. Music and spending time with his family were true passions of his.
Private family services will be held at a later date.