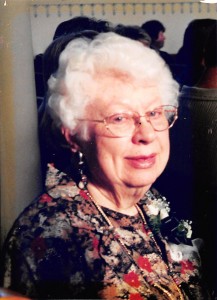 Martha “Marti” Elizabeth Wolkins was born October 17, 1922 and passed away on June 13, 2016 at The Baptist Home in Ozark, MO. She was born in Republic, MO to the late Toynette and Everett Sims. In 1936 she was the Carnival Queen at Willard High School. After graduating from there in 1938 at the age of 16 she went on to Draughon’s Business School. For many years she was a vital employee of the Urology Group of Powell, Ellis and Terry. She loved to travel and one of her greatest joys was collecting lighthouse miniatures along the East and West coasts. Family was always her number one priority and she was never too busy to “help out”. She had a way of maintaining a smile and a sense of humor even through her struggles with Parkinson’s disease. She also enjoyed camping, handwork, keeping a journal, gardening and birdwatching. She recycled before it was even a word and she taught us to value the joy of small things. Her faith was a guiding light throughout her 93 years. For the past 12 years her home has been The Baptist Home where she received loving care each and every day.
She was married to O.E.Wolkins for 63 years and he preceded her in death in 1994. A daughter, Judith Anne, also preceded her in death in 1945. Survivors include: three children and their spouses: Kathleen and Tom Newton, Jana and Jim McDowell of Springfield, MO and Michael and Mary Ann Wolkins of Houston, TX, sister, Billie Eastburn of Springfield, MO. She is also survived by five grandchildren and their spouses: Todd and Chere Bowler, Blair and Jennifer Bowler of Springfield, MO, Nicole and Jon Beaty and Justin and Bridget Moots of Strafford, MO, Ceres and Kevin Head of Rosenberg, TX, 16 great-grandchildren and one great-great grandson, two treasured nieces and one great-niece.
Visitation will be Thursday, June 16, 2016 from 6:00 – 8:00 P.M. at Greenlawn Funeral Home East.
Services will be held at The Baptist Home in Ozark, MO, 1625 Garton Rd., June 17, 2016 at 11:00 A.M. with burial to follow at the National Cemetery.
In lieu of flowers, memorial contributions may be made to The Baptist Home in Ozark, MO.