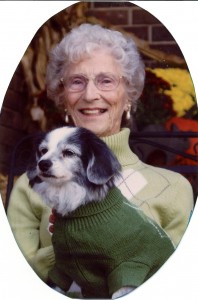 Martha Inez Bailey, age 98 ½, passed away Monday, May 18, 2015 at her home in Springfield, Missouri, surrounded by her family. Martha was born November 25, 1916 in Beaverdam, Ohio to Stanley Milton and Minnie Pearl (Bowers) Vertner. She graduated Beaverdam High School in 1934, and worked as an Executive Secretary at Ferro Corp. Martha married her husband Boyd Franklin Bailey on April 3, 1946 in Gilmore, Texas. Some of Martha’s favorite hobbies were playing the organ, square dancing, clogging, bird watching, and spending time with family.
Martha is preceded in death by her husband, Boyd Bailey; her parents, Stanley and Minnie Vertner; and her brother Ralph Vertner.
She is survived by her two daughters, Debbie Sibet and son in-law Lee Sibet, and Patricia Harper and son in-law Don Harper; her grandchildren, Julie and Cody Allen, Lauren and Matt Hoving, Matt and Emily Sibet, Cindy and Bruce Kramer, Laurie Harter, Lindy and Chuck Cichowitz; her great grandchildren, Bryson and Corbin Sibet, Elsie Hoving, Josie Allen, Cody and Cailee and Kinsey Cichowitz, Kristi Avery, Katie Robinson, and Hank Harter; her great-great grandchildren, Jackson and Kinley Avery, Riley, Harper and Emma Robinson; and her sister in-law, Lura Pritchett.
There will be a Celebration of Martha’s Life in Springfield, Missouri at a later date. She will be buried at Rose Hill Memorial Cemetery in Whittier, California.