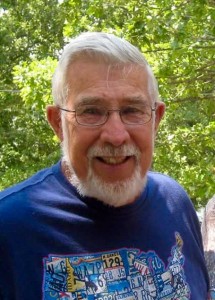 Marvin Leonard Loofbourrow of Bois D’ Arc, Missouri passed away on January 9, 2016 in Ash Grove at the of 77 surrounded by family and friends. Born in Pomona, California in 1938, Marvin was a beloved husband, father, and grandfather.
Marvin attended Pomona High School and, like his Father before him, worked as a plumber extraordinaire in Southern California for many years until he moved his family to Missouri in 1970 and began his life as a farmer. He loved hunting, fishing, motocross, farming, animals, gardening and travel, and was a master storyteller to friends and family. But the role he treasured most in life was that of father and grandfather. He was known as a man of generous spirit who never shied away from hard work, and loved his family and friends.
Marvin was preceded in death by his parents John J. Loofbourrow and Ruby (Smith) Loofbourrow, grandsons Keith and Kevin McClure, granddaughter Amie Lee Loofbourrow, and his beloved dog Princess.
He is survived by his wife Anita Gustaveson; Emma Loofbourrow, mother of his four children: Brenda Harrigan and husband Mike, Karen McClure and husband Gary, Robert Loofbourrow and wife Meta and Charles Loofbourrow and wife Mary; three stepchildren: Cindy Major, Julie Hulsey and James Hulsey; and eight grandchildren: Kyle McClure, Krenda McClure, Taylor Harrigan, Savannah Loofbourrow, Jonathon Brannon, Kaden Dawson, Curtis Major and Hannah Loofbourrow. He is also survived by his brother Melvin Loofbourrow and sister Linda Loofbourrow of Southern California, as well as nieces, nephews, and cousins far and wide.
Visitation will be Monday, January 11, 2016 from 5:00 to 7:00 PM Greenlawn Funeral Home North-Springfield. Funeral services will be Tuesday, January 12, 2016 at 1:00 PM at the funeral home with burial following at Greenlawn Memorial Gardens.
Memorials to: Ozark Mountain Deaf Church, 776 West farm Rd. 186, Springfield MO 65804.