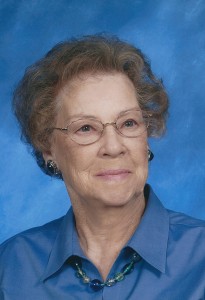 Mary Dock Massey, age 90, of Springfield, MO passed away Wednesday, September 16, 2015. Mary was born Mary Wylona Mustain in Peach Orchard, AR on January 9, 1925 to William Allen and Margret Ann Mustain. Mary was preceded in death by her parents, 5 brothers, 6 sisters, first husband Robert L. Dock and second husband William E. Massey.
Mary grew up on the family farm in northeast Arkansas and subsequently her family moved to the boot heal of Missouri prior to her teenage years. Mary’s family placed their priorities in faith and family first. She carried her Christian faith with her throughout her life. Upon graduation from Risco, Missouri High School in 1941, Mary moved to Detroit, Michigan and began working for the city transit system. Mary later returned to southeast Missouri where she met her first love, Robert L. Dock. Robert and Mary were married on July 24, 1943. In 1949 Robert and Mary, with three young children in tow, moved to Springfield, MO. After the fourth child arrived, Mary went back into the work force and pursued her career as a secretary while continuing her education at Southwest Missouri State Teacher’s College (MSU) and Drury College. In 1968 Robert and Mary founded Dock Construction Co. During this time, Mary Co-Founded the Springfield “Hawthorn Chapter” of Women in Construction. She received designation as a “Certified Professional Secretary” and served on many national boards of both of these organizations. Mary also served as the President of The Women’s Division of the Springfield Chamber of Commerce. All the while, Mary continued to teach Sunday school class at South Haven Baptist Church where she and her family were charter members. A special time for Robert and Mary was when they were able to share their lives with Alberta Gomes.
After Robert’s death in 1989, Mary wed William (Bill) Massey. For 15 years Mary and Bill enjoyed traveling and spending their winters in Florida until Bill’s death.
Mary is survived by her sons Ervin Dock and wife Sandra, Morris Dock, Robert D. Dock, Paul Dock, step-daughter Cindy (Massey) Coburn and husband Gary, 12 grandchildren, 12 great grandchildren, 1 great-great grandson and many nieces and nephews.
The family would like to thank The Waterford at Ironbridge for their special love and compassion for the last year and a half that she was a resident. A very special “Thank you” goes out to the Phoenix Home Health Care staff for their tremendous loving care of Mary while allowing her to maintain her independence and dignity.
A visitation will be held on Tuesday, September 22, 2015 from 6 till 8 p.m. at Greenlawn Funeral Home East. Celebration of life will be on Wednesday, September 23, 2015 at 10:30 a.m. at the funeral home. Interment will be follow in White Chapel Memorial Gardens.