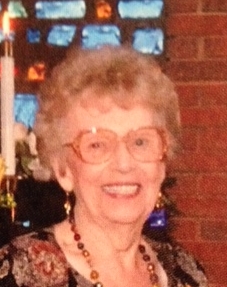 Mary Ruth Powell died peacefully in Branson, Missouri on April 12, 2015 surrounded by her family. She was born at the Willows Kansas City Maternity Home July 1, 1925 and was adopted by Abraham and Myrtle Gash, six months later. She attended school in Elmer, MO where she was valedictorian of her class and attended the Kirksville State Teachers College. She was married to Dean Spencer Powell in Elmer, Missouri on March 4, 1946. They had three children, Richard Powell (Linda), Lee’s Summit, Missouri, Barbara Powell, Napa Valley, California and Robert (Brenda).
Mary spent the early part of her life in Northeast Missouri working for the La Plata School District; moving to Branson in 1968. She was employed by The School of the Ozarks and by various non-profit organizations-she never retired. Most recently she has been an active volunteer at the Branson Senior Center. She served on the board of Southwest Missouri Council on Aging. Mary was a lifelong member of the Christian Church in LaPlata and in Branson where she served as a Trustee at the time of her death.
Mary was predeceased by her parents, Abraham & Myrtle Gash, her husband, Dean Spencer Power and son, Robert Dale Powell. Mary was devoted to her children, grandchildren and the many organizations she served. She is survived by her son, Richard Powell (Linda) of Lee’s Summit, Missouri and daughter Barbara Powell of Napa Valley, California; daughter-in-law, Brenda, grandchildren Amy, Bryan, (Amber), Terry, (Steve), Justin, (Ashley), Jennifer, (Adam) Andrew and Chase (Sarah); great-grandchildren Tyler, Holly and Megan and baby girl Powell due the end of May.
Visitation will be held on Tuesday April 14th at 10:30 a.m. at the Branson Christian Church with services to follow at 11:30. Lunch will be served at the Church following the Celebration of Mary Powell’s life. Graveside services will be held at a later date in LaPlata, Missouri Cemetery.
Donations are suggested to the Robert D. Powell Music Scholarship Fund at College of the Ozarks or the Building Fund at the Branson Christian Church.