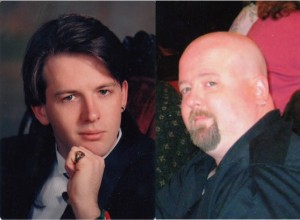 Matthew Donald Turner passed away unexpectedly at his home in Springfield, MO on Friday, March 11, 2016.
Matt was born in Dayton, Ohio as the second child of Phillip R. Harris and Sally Harris (Turner). He grew up in Ohio, Maryland, New Jersey and Pennsylvania. He graduated from Stroudsburg High School in Stroudsburg, PA in 1990. He later lived in Houston, TX and in Philadelphia, PA. During his years in Philadelphia, Matt was a well-known and popular disc-jockey with East Coast Event Group. His engaging personality, polished voice, professional demeanor and knowledge of popular music made him in high demand for weddings and other social events.
Matt came to Springfield, MO in 2007 to be closer to his family. For a time, he was a disc-jockey at the Electric Cowboy. Most recently, he was employed with The Arc of the Ozarks in the Supported Living Department.
Matthew was preceded in death by grandparents: Gean and Robert Pappas and William and Bertie Harris of Hamilton, OH, and Clinton and Mitzi Turner of Belle Glade, FL. He leaves his mother, Sally (Turner) Reese of Nixa,MO, his sister Alexa (Turner) Dickson and brother, Todd Turner both of O’Fallon, MO.
In addition, Matt leaves his biological father, Phillip R. Harris and his partner Sheila Wells of Miamisburg, OH; his adoptive father, Gary Turner and his wife Kathy of Lowell, AR; aunts and uncles: Donna and Ed Hallin of Scottville, MI and Jim and Jenny Myers of Hamilton, OH. He also leaves several cousins and a young niece and nephew.
Matt was a talented and imaginative cook who enjoyed experimenting with exotic cuisines, new spices and creative recipes. He never lost his love of music and enjoyed independent films. He was a doting uncle, a loving brother and a caring son. Matt had faced many health challenges including cancer, diabetes, hypertension and other concerns. He faced his many challenges with humor, resolve and quiet strength. He will be greatly missed by family, friends and all who knew him.
Cremation will be under the direction of Greenlawn Funeral Home North. A private service will be held at a later date in the Poconos Mountains of PA.