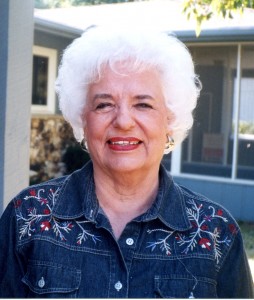 Maurine M. Wilson, age 88, of Branson, died July 10, 2016, in hospice care at Mercy Villa in Springfield.
Maurine was born November 24, 1927, in Springfield, Mo, to Jacob Paul Killian and Grace (Williams) Killian. She attended schools in Springfield, Kansas City, and Hollister, California, plus some college courses. She married Donald Wilson in 1985 and moved to Branson in 1988 where she has lived for almost 28 years.
Maurine retired as a regional administrator of the American Red Cross in Clay County, Mo, and previously served in Cass and Nodaway Counties. She was recognized for 57 years as either a staff member or a volunteer for the Red Cross. She previously owned and operated three Merle Norman Studios in St. Joseph, Mo, and Maryville, Mo. She also assisted merchants in establishing merchant accounts in Kansas City when credit cards were first introduced. Since her retirement, she has worked part time in Branson as a step-on guide to tour buses and a sales clerk at the dress shop at Chateau at the Lake.
As a volunteer in Branson, she has served as president of the Senior Nutrition Center in Branson as well as a board member, and she has served as a board member for Lakewood Estates Condominium Association. She also volunteered at the Branson Visitor Center of the Branson Chamber of Commerce.
Maurine married John H. Turnbull in Salinas, CA, in 1944, and to this union were born two sons, who survive: Reginald Turnbull and wife Anita, who reside in Jefferson City, Mo, and Jan Paul Turnbull and his wife Jesserel, who reside in Los Angeles, CA. She has 5 grandchildren: Bryce Turnbull and his Wife Gretchen; Kyle Turnbull and his wife, Amy; Ryan Turnbull and his wife Kaylin—all of Overland Park, KS; Venise Turnbull, and John Robert Turnbull, of Los Angeles, CA. She has 5 great-grandchildren, Stella, Cooper, Brooks, Gracelyn, and Harrison Turnbull. She is also survived by 7 nieces and nephews, including Joe Killian, Bill Killian, Susan Moore, Mike White, Pat White, Peggy Lisenbe, and Cindy Murphy.
Maurine is pre-deceased by her husband, Donald Wilson; her parents; her brothers Robert Killian and Bill F. Killian, and her sister Geraldine White.
Visitation will be at 10 a.m. on Friday, July 15, 2016, at the Greenlawn Funeral Home, in Branson, with a Memorial Service to follow at 11:00 a.m. In lieu of flowers, Maurine requests donations to either the Branson United Methodist Church or the Branson Salvation Army.