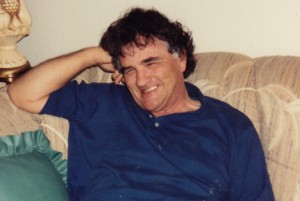 Max Darrell Owen, the World’s Greatest Auto Mechanic left this world on Monday April 6, 2015 after suffering a massive stroke at the age of 76. He was born October 15, 1938 in Springfield, MO, to Don Owen and Drucilla Gard.
Max has a always been mechanical, since he was 5 years old and took apart his mother’s vacuum cleaner. It then progressed to cars and it became his career. Max worked at Bud Martin Motor Company for many years till he opened his own shop on St. Louis Street. MOARC…..Max Owen Auto Repair Center….Max raced in the Pro Stock Division at the Ozark Raceway in the 1960’s. He discovered riding Enduro motorcycles in the early 1970’s. He enjoyed Trials riding the most. He won multiple awards during this time and even at 76 could do things on a motor cycle that most younger men couldn’t do.
Max was an avid animal lover, especially dogs and cats that he would pet for hours. He even took in several 3-legged kitties that nobody wanted and kept them at his shop. Of course we can’t forget he would love a good joke or pun. Whenever you had a conversation with him he would tell you at least one joke. Max also loved good music and the louder the better!
Preceeding Max in death was his father, Don Owen, and paternal and maternal grandparents. Survivors include 2 daughters; Kim Kauflin (husband Edward) of Springfield, and Karla Whittington of Ozark; four grandchildren, Jessica Whittington, Curtis Whittington (wife Julie), Nicole Rippy and Alyssa Maples. One sister Patsy Beebee of Shellknob and his mother Drucilla Gard of Aurora.
A celebration of Max’s life will be held at 2:00 p.m. Saturday, April 11, 2015, in Greenlawn Funeral Home North. In lieu of flowers you can make a donation to C.A.R.E. Adoption Center in Springfield, MO