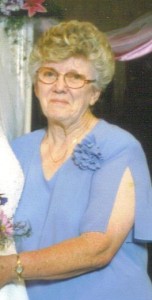 Maxine Ethel Speidel, 85 was born in Durbin, North Dakota on January 28, 1930 to her parents Herman Adolf Franz Miller and Mary C. (Werner). She married Richard Lewis Speidel on October 2, 1949 in the Canaan Moravian Church, Davenport, North Dakota. Maxine was mother of David and Linda, grandmother of four, Cristal, Justin, Matthew and Kari, and great grandmother to four children, Kalista, Braden, Hannah and Alec. Maxine passed away September 3, 2015. One of eleven brothers and sisters, she is survived by her sister Billie Schatzke and brother Vernon Miller, both of Fargo, North Dakota. Maxine is now with the lord; may she rest in peace.
Maxine, after graduation from the Casselton, N.D. High School she moved to California seeking employment while living with her sisters. There she met Dick (Richard) and found a career with the phone company. Maxine, after several moves, company changes and new assignments retired as an AT&T manager in 1990. Mom enjoyed flowers, particularly roses. She would order them and Dick cared for them. Music was another passion and Lawrence Welk a favorite. In that she and Dick attended one of his shows in California and also the Branson Welk Palace. Maxine was a long time member of the Immanuel Lutheran Church on Blackman Road, Springfield, Missouri and attended the Methodist church in Nixa with her family since 2008.
Services are expected to be held at the Aldersgate United Methodist Church, Nixa, MO on Wednesday, September 9, 2015 at 11:30 with interment following at 1:00 PM located in the Veteran’s Cemetery 5201 South Southwood, Springfield, MO. Visitation are scheduled at the Greenlawn Funeral Home South, 441 W Battlefield; Springfield, Missouri from 6:00 to 8:00 PM on Tuesday, September 8, 2015.