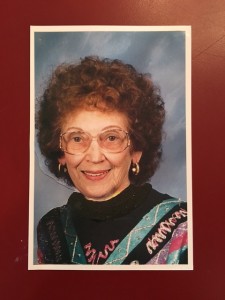 Maxine Pearl (Ihrig) Bryant, Springfield, MO, passed away November 22, 2015 in Ozark, MO. She was born August 13, 1922 in Fairfield, MO. Her parents were Ollie H. Ihrig and Margaret (Maggie) Breshears Ihrig. Ollie was German, going back to the Amish Mennonite faith in Alsace Lorraine between France and Germany. Maggie was Choctaw Indian and French. Maggie was so proud of her heritage. In 1924 the family moved to McPherson, Kansas where Maxine grew up and graduated high school in 1940, after which the family moved back to Everton Missouri area where she met and fell in love with a handsome Missouri farm boy, James Loren Bryant. They were married December 7, 1941 (Pearl Harbor Day) and their union was blessed with four children; a daughter, Sherry Jo and three sons, James (Butch), Kelly and Mark. After 57 years together, Loren passed away on May 7, 1999. He and Maxine raised their family in Ash Grove, MO and she spent many years as a self-employed business woman, other sales work and helped her husband in his auction business. Being a wife and mother was foremost in her life. Her free hours were spent creating art work and writing. As a great legacy, she wrote a set of three books for each of her four children, her brother, Don Ihrig, and for herself. The books are on genealogy, memoirs, etc., and are handwritten. Maxine has a manuscript also handwritten in the archives of the museum in McPherson, KS. It chronicles the early years of that small city and what she experienced while living there. As a teenager she had a poem published in the New York World’s Fair Anthology in 1939 and other publications.
Maxine was baptized in 1953 by Rev. Faust Matthews while living in Everton. After moving to Springfield from Ash Grove in 1979 they joined Central Christian Church.
She is survived by; daughter, Sherry and husband Jerry of Hollister, MO, son James (Butch) and wife Peggy of Albuquerque, NM, son Kelly and wife Amanda of St. Peters, MO, son Mark and wife Susan of Ozark, MO, her grandchildren, Kevin and Maria Gahagan, James Allen Bryant, Kristopher Bryant, Rebecca Burek and Mike Wolf, Chad and Lara Bryant and great-grandchildren Camerion Gholson, Mia Wolf, Rogan Bryant and Lily Kim Gahagan. Also surviving is her brother Don Ihrig and wife Wana of Springfield, sister-in-law Ann Fite of Fowler, CA, Linda and Paul Rose, Springfield and several nieces, nephews and cousins.
Maxine was preceded in death by a precious granddaughter, Kimberly Jo Gahagan, who passed away at age 12 in 1978. Also preceding her was her husband Loren in 1999, her mother and dad, two sisters, a special cousin, Jean Holman, and numerous other loved family members.
A graveside service will be Wednesday, November 25, 2015 at 11:00 a.m., Ash Grove Cemetery in Ash Grove, MO, with Pastor Barry Young officiating. Memorial contributions may be made to organizations that help the needy in our area or to Central Christian Church.