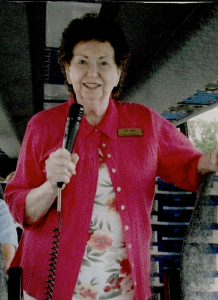 Maxine Wellbaum Stinson age 91 went to be with her Heavenly Father on February 3at Woodland Manor in Springfield Mo. Maxine was a life long resident of Springfield. Born on July 7 1924 to Moses and Lockie Wellbaum. Maxine was preceded in death by her parents and 3 brothers, Willis, Wilbur, and Authur. She is survived by her son William Robert “Bob” Stinson, daughter Patricia Stinson Whitman, son-in-law Darrel Whitman, 3 grandchildren, Daren Whitman and wife Amanda, Scott Whitman and wife Jill, and Jon Whitman and wife Mandy, and 6 great-grandchildren, Mitchell, Brody, Virginia, Kally, Benjamin and Raleigh. axine was a retiree of General Electric of Springfield. She was a lifelong lover of Jazz music and was a founding member serving on the board of directors of the Springfield Jazz Society. Maxine was also a bingo enthusiast and in her later years founded Fun Travels specializing in charter trips to bingo halls and casinos around the nation. She was affectionately known as Bingo Granny around the community and gained national notoriety with appearances on the NBC Today Show and the David Letterman Show after an encounter with Missouri Highway Patrol over Dollar bingo games.
A visitation for Maxine Stinson will be from 5:00 to 8:00 P.M. Monday, February 8, 2016 at Greenlawn Funeral Home East. Interment will be at a later date at Clear Creek Cemetery.