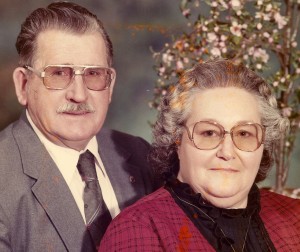 Melba Rose (Collins) Phillips passed away in her home February 15, 2015. She was born June 6, 1928 to Claude and Esther Collins.
She married Albert Lee Phillips December 3, 1944 and remained by his side until his death in July 2006. Lee and Melba were partners in every sense of the word, living life through the ups and the downs and enjoying the time they had together.
She was preceded in death by her daughter, Esther (Phillips) Keeling and son-in-law, Charles Love. She is survived by her sons Melvin (Janis) ,Aurora; Frank, Fair Grove; Jim, Fair Grove; Harold (Pam), Springfield; Richard (Delores), St. Louis and daughters Betty Love, Fair Grove and Janet (Larry) Shiner, Lees Summit. She took great pride and delight in her 14 grandchildren, 28 great-grandchildren, one great-great grandchild and a host of nieces and nephews.
Family visitation will take place Wednesday February 18 from 5:30 to 7:00 p.m. at Greenlawn Funeral Home North, 3506 N. National Ave. At Mom’s request, there will be no funeral service. Burial will be at Bellview Cemetery.
In lieu of flowers, the family requests donations made to Hospice Compassus of Springfield Missouri.