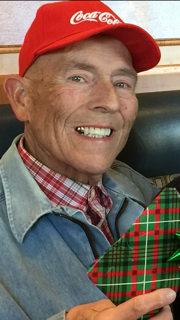 Michael L. Arnall, 75, passed away in his home in Springfield, MO on March 2, 2020. He was born on February 27, 1945 in Fort Campbell, Kentucky to Frank Arnall and Betty Estell-Arnall. Michael was a graduate of Central High School in 1963, where he played football. He married Betty L. Mikesell on December 22, 1962, and she was the love of his life.

He loved his family and all the fun memories that consisted of outdoor cookouts, bonfires, and making his homemade banana ice cream for everyone. He had a passion for hiking, taking family vacations, seeing the wildlife, playing baseball for fun, and floating the Bryant River. He made friends everywhere he went and loved going swimming at The Meyer Center in Springfield. He enjoyed eating breakfast with his friends at Hardee’s every morning and getting together with his family to play the card game Authors after a good lunch at Culver’s. Most of all, he loved spending time with his granddaughter, Katie, who he affectionately called his sweetest heart.

He worked at City Utilities as a shop foreman from 1968, to 1996, when he retired early because of health reasons. He had a passion for working on cars and he also raced cars from time to time. He was also a Greene County Deputy Reserve from 1974 to 1979. While in this service, he received an award for “Officer of the Year.” He was also a member of Hillside Baptist Church in Springfield. He will be missed by everyone he knew. He never met a stranger and lit up any room with the smile on his face.

Michael was preceded in death by his parents Frank Arnall and Betty Estell-Arnall, his wife Betty Arnall, and his sister Patricia “Pat” (Arnall) Graham.

He is survived by his two daughters Michele Reed; Buffalo, and Melinda Phillips; Springfield, one granddaughter Katie Reed, a sister-in-law Jeannie Feazell and her husband, Johnny; Springfield, other nieces and nephews, and a very special caregiver and family friend that he considered his daughter, Ashley.

Visitation services will be Thursday, March 5 between 6:00 and 8:00 p.m. at Greenlawn North Funeral Home. Graveside services will be Friday, March 6 at 10:00 a.m. at Danforth Cemetery with Brother Cecil Tolbert officiating, and under the direction of Greenlawn North Funeral Home. Memorial contributions are suggested to Hillside Baptist Church Building Fund. in Michael’s memory.