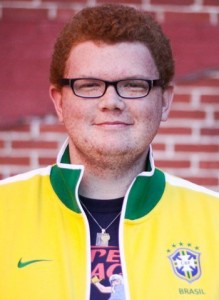 Michael Bernhard Johnson was born on April 13, 1990, in Santa Cruz, California, and passed away on June 6, 2015, in Springfield, Missouri. He and his missionary parents moved to Brazil when he was eight months old and he was raised in the city of Campinas, state of São Paulo, with periodic furlough stays in San Jose, California.
He studied at the American School of Campinas most of his life and graduated from the High School in June of 2008. He played soccer and basketball on the school’s sports teams. He was active in the youth group of the Assembly of God church in Campinas where his parents served as the youth pastors for several years and he was a talented keyboard accompanist for the youth choir and the church’s worship team.
He began his college studies in Springfield, Missouri, first at Central Bible College and followed by Missouri State University. After a break from his studies, he continued his education in Biblical Studies at Evangel University in January of 2015.
Michael was preceded in death by his younger brother Daniel Terrence Johnson soon after birth in March of 1994. He is survived by his parents Terrence Bernhard and Elizabeth Ann Johnson, who continue serving as Assemblies of God missionaries to the country of Brazil. He is also survived by his maternal grandparents Ede and Robert Wood, and by Doris Johnson, his paternal grandmother and missionary to Brazil, along with many uncles, aunts and cousins in the Springfield area and throughout the country.
Funeral services will be held at 2 p.m. on Saturday, June 13, 2015, at the Greenlawn Funeral Home East, 3540 E. Seminole, in Springfield, MO. Visitation will begin at noon and the graveside service will be held at the Greenlawn Memorial Gardens on National Ave. following the funeral service.