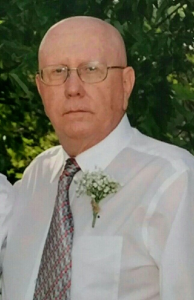 Michael Franklin Harrell, 71, of Springfield, MO was born on October 17, 1944 in Springfield to Mary Margaret (Morton) Harrell and Frank Harrell. He departed this life on Friday, February 5, 2016 after a long illness and brief battle with Cancer while at St. Joseph Medical Center in Kansas City, surrounded by his loved ones.
He lived on US Army bases from the age of 6 week old til 16 years of age. He attended High School in Wurzburg, Germany returning for his senior year to Springfield. He graduated from Parkview High School in 1962 and attended SMSU, Drury, MIT and Missouri School of Banking. He served six years during the Vietnam era, in the Army Enlisted Reserves discharged as a Supply Sergeant. He was married to Phoebe Ann Adams (Blaine) on October 10, 1980. He was a past member of Ducks Unlimited Monett (long term sponsor), Monett Sportsman League, and Kiwanis Club serving on their board as the Secretary of the Monett, MO Club for 10 years. He was the Kiwanis Charter Club President of the Mt. Vernon, MO club and served on their board for 10 years. Mike served on the board of the Center for Financial Training, Mr. Vernon Betterment Association and Find. Mike spent over 42 years in the financial field. He ended his career as a Bank Vice President, Area Senior Lender, in Mt. Vernon, MO on July 1, 2008.
Mike loved to deer hunt both archery and with guns. He also enjoyed spending time with his friends and family.
Mike was preceded in death by his mother Mary Luse; stepfather Wayne Luse; his biological father Frank Harrell; Two of his sons, Lance Christopher and Michael “Scott” Harrell.
He is survived by his wife Phoebe of 35 years; daughter Michelle Sloan and husband Tracy of Harrisonville, MO; Son Brent Harrell and wife Hope of Rome, Italy; Son Scott Adams and wife Renee of Jacksonville, FL; Son Thom Adams and partner Mark of Overland Park, KS. He has seven grandsons Jordan; Jarrod and wife Niomi Adams; Austin and wife Ashley Sloan; Aaron Sloan, Alec Sloan; Brayden Harrell and Cade Harrell Pilkinton. Four granddaughters Autumn Ladd, Kyleigh Harrell, Isabella and Olivia Harrell. Two brothers Rick (Sue) and Tim (Lori) Luse and two sisters Cherie Salois and Laurie Luse.
Visitation will be at Greenlawn Funeral Home East in Springfield on Monday, February 8th, 10:00a.m., Funeral at 11:00a.m.with graveside to follow at the Greenlawn Cemetery.